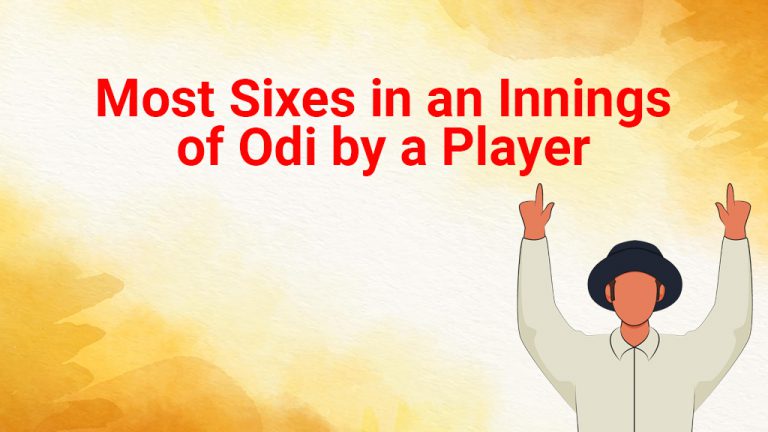 Most Sixes In An Innings Of ODI By A Player

A Sixer is one of the most exciting things in a cricket arena. Everyone has an emotion to express when a batter sends the ball over the boundary. While the players and supporters of the opposing team let out sighs and dejected screams, those in the stadium cheering for the team in the crease shout with joy. That is a Sixer’s power. One Day International matches have seen instances where a single player hit a barrage of sixes in a single inning.

Here are the players who have hit the most sixes in an ODI inning!

With his 17 sixers during the ICC World Cup encounter against Afghanistan on June 18th, 2019, Eoin Morgan beat the previous record. Moreover, Rohit Sharma’s outstanding performance against Sri Lanka on December 13th, 2017, was the most amazing surprise for his fans. He blasted 12 sixes on his route to 208 runs. He is the only player on the list to feature twice, with 16 and 12 sixes, respectively.

With these incredible achievements, Sharma elevated himself to one of cricket’s greatest players. For more details of cricket updates follow!

Eoin Morgan, an English batsman and one of cricket’s top finishers, performed an astonishing achievement during the 2019 ICC Cricket World Cup. In the World Cup encounter against Afghanistan on June 18, 2019, he hit 17 sixes. Additionally, he surpassed the long-standing mark held by Indian batsman Rohit Sharma.In that game, Morgan scored 148 runs in just 71 balls at Old Trafford Cricket Ground, one of the largest cricket stadiums, with 17 sixes and 4 boundaries. Additionally, in that game versus Afghanistan, he had a blazing fast batting average of 208.45.

One of the best hitters of all time, Rohit Sharma, is in the second position on the list of batters with the most sixes in an innings. The current Indian batting sensation crushed Australia on November 2, 2013, in Bengaluru, with a whopping 16 sixes.
In the same innings, he faced 158 balls, hit 12 boundaries, and scored 209 runs at a strike rate of 132.27. On that specific day, he scored some of the biggest sixes in the history of cricket

AB de Villiers, a contemporary South African player, is the next to hit the same number of sixes in a single innings. He hit 16 sixes against the West Indies on January 18, 2015, in a game played in Johannesburg.

In the same innings, he faced 44 balls, hit 9 boundaries, and scored 149 runs overall with a strike rate of 338.63. With his outstanding performance on that particular day, he cemented his spot as one of the greatest batsmen of all time.

Chris Gayle, a current West Indian batsman, is another player to hit the same number of sixes in an ODI inning. Gayle hit an incredible 16 sixes in one innings against Zimbabwe on February 24, 2015, in Canberra.

In the same innings, he faced 147 balls, scored 215 runs, had a strike rate of 146.25, and hit 10 boundaries. Gayle, one of cricket’s most potent hard-hitters, also set a record for the most sixes in T20 international play.

In the same innings, he faced 96 balls and hit 15 boundaries in addition to scoring 185 runs overall with a strike rate of 192.70.

Corey Anderson, a current New Zealand player, is ranked sixth on our list of players with the most sixes in an ODI inning. Anderson hit a stunning 14 sixes against the West Indies on January 1, 2014, in Queenstown.

Xavier Marshall, a former West Indian player who smashed an astounding 12 sixes in a match against Canada on August 22, 2008, at King City, comes in 7 on the list of players with the most sixes in an ODI inning.

Sanath Jayasuriya, a former Sri Lankan player who also hit 11 sixes against Pakistan on April 2, 1996, in Singapore, comes in eighth on the list of players with the most sixes in an ODI inning.

Shahid Afridi, a former Pakistani player who also hit 11 sixes in a game against Sri Lanka on October 4, 1996, in Nairobi, is one of the popular men to hit the most sixes in a single ODI inning.

In the same innings, he faced 40 balls, hit six boundaries, and scored 102 runs with a strike rate of 255.00. Afridi, regarded as one of cricket’s all-time greats, proved his mettle that day with some fantastic batting.