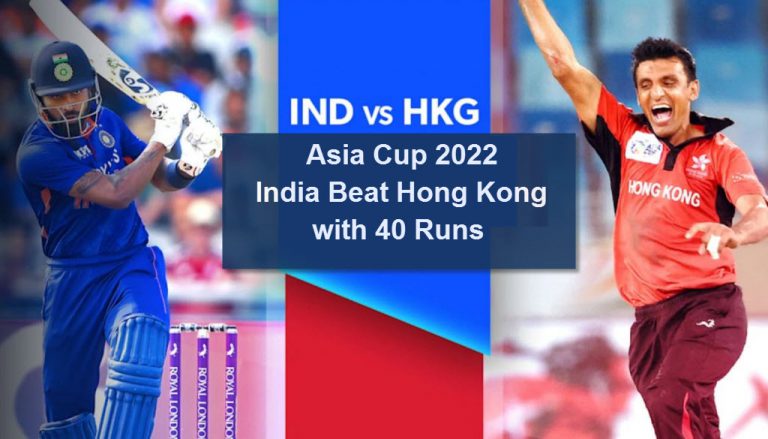 Summary – India defeated Hong Kong by a score of 40 runs to reach the Super Fours. India had set a goal of 193 runs while batting first, owing to fifty-plus scores from Suryakumar Yadav and Virat Kohli. Hong Kong got off to a strong start as the youthful Indian pacers struggled. However, the Hong Kong chase stalled after the Indian spinners entered the picture. Despite their best efforts, Nizakat Khan and Babar Hayat ultimately failed to win India Vs Hong Kong Asia Cup.

In the Asia Cup at Dubai International Cricket Stadium, Hong Kong won the toss and was elected to field first. Rohit Sharma and KL Rahul got off to a relatively quick start. Rohit ended up falling in India and started out the tournament with the perfect way to get them into the groove, winning a close match against arch-rivals Pakistan.

Suryakumar Yadav and Virat Kohli scored fifty runs to help India beat Hong Kong with a challenging total of 192/2. When Suryakumar Yadav walked out to the middle, Kohli was on 33. Surya is on 68 from 26, and Kohli is on 59 from 44 at the end of the inning. India has given Hong Kong 193 points to win.

Hong Kong started playing and hit the first boundary in 8 balls with the bat of Nazakat. Arshdeep Singh got to bowl the second over after a tight opening from Bhuvneshwar Kumar, who gave away just four runs. FOUR! Yasim Murtaza, a southpaw, is that person. Cutaway through the backward point that was short and wide came from Arshdeep. The fielder made a good effort, but the ball eluded him. Murtaza then adds another FOUR. The batter hits the on drive despite being a length ball on the leg stump. The wicket follows. Avesh Khan made a wonderful catch at fine leg after the ball went up in the air. With the offense in motion, Ravindra Jadeja just allows three runs. This is standard Jadeja. Avesh Khan catches the ball quickly and flatly.

Due to Hardik’s absence, India has switched out two bowlers during the powerplay. Bhuvi is the only one bowling his two overs. Arshdeep, Jadeja, and Avesh Khan came next. Boundaries, though, kept coming from Hong Kong in the Power Play. Hong Kong played excellent batting, notably Babar Hayat. A six appeared first, followed by the FOUR. Avesh is penalized for his short ball length.