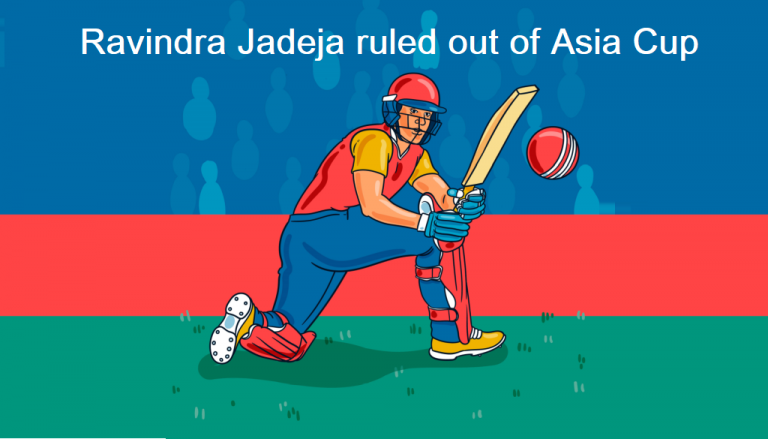 Ravindra Jadeja will not be playing further in the Asia Cup 2022 matches due to an injury to his right knee. Instead of him, Axar Patel will be playing, says the All-India Senior Selection Committee. “Ravindra Jadeja sustained a right knee injury and was ruled out of the tournament. He is currently under the supervision of the BCCI medical team, “BCCI mentioned in a statement on Friday.”

As per the Latest Cricket News, BCCI did not make it clear, but it seems that the all-rounder suffered this injury in the match against Hong Kong, which happened this Wednesday.

This is not a blow that Team India can easily absorb. The absence of Jaspreet Bumrah was already an issue, and now, considering the form of Ravindra Jadeja, this is not good news.

Recently, in a match against Pakistan, when India was trailing, the all-rounder played a crucial inning, scoring 35 runs off 29 balls, which aided Team India’s victory. In that match, the wickets fell continuously, and the run rates were also insignificant. Jadeja played like a true cricketer, and he managed to maintain the wicket and score the runs. He maintained a 36-run partnership with Surya Kumar Yadav and a 52-run partnership with Hardik Pandya, which played an essential role in bringing India to a winning position.

In a recent match with Hong Kong, Jadeja turned out to be the most economical baller. He bowled 4 overs in which 15 runs were scored and took a wicket too. This is very low considering the T20 format of cricket. Hong Kong’s batting order was at its best and made good use of the power play while chasing 193.

Though Axar Patel is playing instead of Ravindra Jadeja, it is doubtful that we will see any outstanding cricket from his end, considering his limited experience.