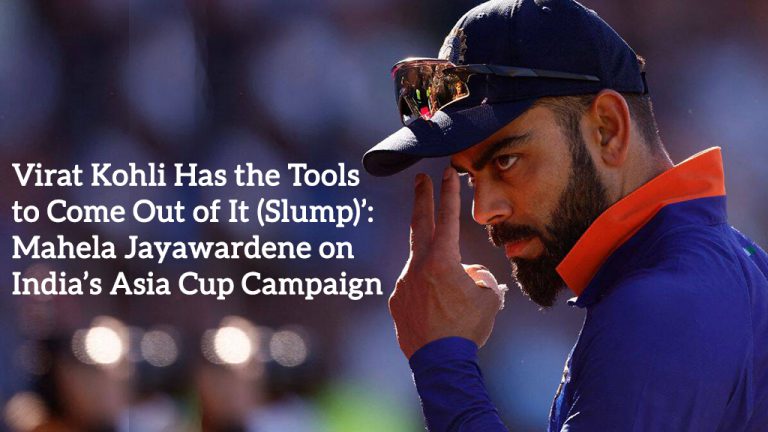 According to Virat Kohli news, Mahela Jayawardene is of the opinion that Virat Kohli, the former captain of India, should be given every opportunity to display his best form in Asia Cup 2022. The men in blue are all set to play Asia Cup 2022 which is about to commence on the 27th of August in the United Arab Emirates.

A powerful 15 member squad of Indian players have already been announced for the tournament, earlier this week, who would play against the arch-rivals Pakistan on 28th August. KL Rahul and Virat Kohli made their returns to the Indian squad. Analysing the strengths and skills of the Indian players, the former skipper of Sri Lanka backed up Virat Kohli saying that he should be given every chance during the Asia Cup to find his best form. This would strengthen the hope for him to travel to Australia in good shape in October for the T20 World Cup.

Kohli had been resting for a while now and is making a comeback in the Asia Cup. He had been rested when India played ODI and T20I series against West Indies. He is also rested from the 3 match ODI against Zimbabwe. According to the Virat Kohli news, Kohli has played only four T20I matches this year in which he has managed to score only 81 runs at an average of 20.25 with one half century. But he is all set to make a return to the upcoming edition of the Asia Cup 2022 to be held in the United Arab Emirates.

What Jayawardene Has to Say:

On the latest episode of The ICC Review Mahela Jayawardene said that Virat is a quality player and it is unfortunate what he is going through at the moment. He believes that Virat has the capability to come out of the slump form and play better. He has displayed such instances in the past and he would come through this time as well. Jayawardene has remarked that class is permanent but form is temporary.

Kohli struggled for runs in the IPL season this year as well. He hardly managed to score two half centuries. He scored 341 runs in total from the 16 innings that he played for his team RCB. Lately, Kohli had come under fire as he was not being able to perform in an appropriate manner. In July 2022, Kohli had received numerous starts in England, but had failed to make a satisfactory score. However, Jayawardene is confident about the return of the Indian batter.

KL Rahul, who had been rested for quite a while now due to injuries and Covid 19, has also returned to the side and is also selected as the vice captain for Asia Cup. Rahul had undergone a sports hernia surgery and had been recovering during the past months. Just as he had recovered, he was diagnosed with Covid-19 and had been out of action for a long duration. According to the latest news about cricket, Jayawardene has remarked that it would be a concern for India as Rahul had been out for a while now since the IPL and thus, having game time is essential, specially in the middle. Some game time can help him to get his confidence back and it would be beneficial for him as well as for the Indian team.

Jayawardene remarked that although Rishabh Pant does not have much experience as an opener in domestic cricket, he believes that Pant has the capability to do that. His game would not change despite the position he is batting in. He is a natural player and therefore there is the option for Pant to open the innings. Pant can open the innings with Rohit Sharma if Rahul is not in good shape. Pant had opened in T20Is twice against England in July.