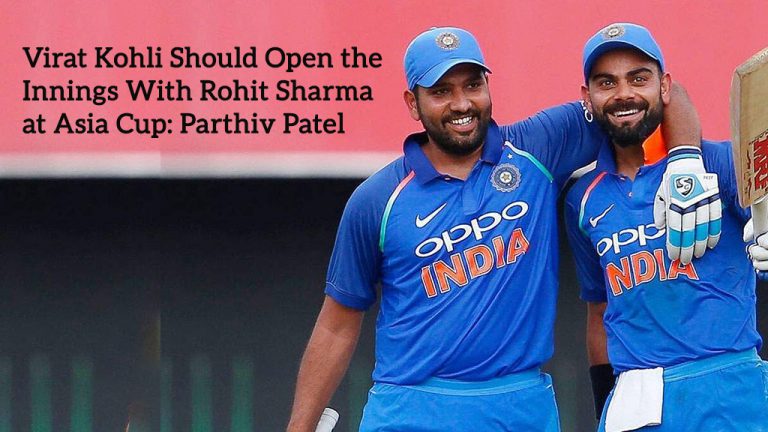 Parthiv Patel thinks that Virat Kohli, the former captain of India, should open the innings at Asia Cup as he previously used to play as an opener and secured great scores for Royal Challengers Bangalore. For the upcoming Asia Cup, India is spoilt for choice when the opening partnership is to be considered. A lot of suitable combinations are at the disposal of India but the former wicketkeeper of India, Parthiv Patel feels that Rohit Sharma and Virat Kohli should open the innings during the Asia Cup matches.

Patel feels that KL Rahul might have to be benched if India wants Dinesh Karthik and Rishabh Pant to take part in the Asia Cup 2022 tournament. According to cricket news for India, Rahul had contracted a hamstring injury and undergone a hernia operation. Despite the fact that he had been rested out of International matches, he has been chosen as the vice captain of India for Asia Cup. During his absence, players such as Suryakumar Yadav, Pant and Shreyas Iyer have started the innings.

Patel feels that Hardik Pandya and Yadav cannot be replaced and as there is only one position open in the middle order, Karthik and Pant are equally matched and thus the best option of fixing the problem is to drop Rahul and replace him with Virat Kohli who can start the innings with Rohit Sharma.

According to the latest news about cricket, he stated that the openers should be Virat Kohli and Rohit Sharma. He wants Virat to open and play his heart out. He has taken a break but there is no doubt in Virat Kohli’s batting skills and ability and as an opener one gets to start at 0/0 and when one is set to bat at three, the game cannot be played according to how one wants to. One needs to play according to the circumstances and when one gets to open the innings, one has the power to create the game situation.

Parthiv Patel mentioned that Kohli has all the skills and can play however likes at a strike rate of 170. Even when two wickets have fallen at an early stage in the game, Kohli can still play at a strike rate of 130. The runs and number of hundreds he has scored stand witness to how great a player he is.

He can play freely and takes no pressure while playing which is a good side and should be utilized. He has achieved a lot and has nothing to prove. He has scored a lot of runs and big innings whenever he has got the chance to play as an opener in IPL 2016, 2017 and 2018 and he likes to play in that position. He has an attacking stance and likes challenges and displays a new Virat Kohli everytime.

Harsha Bhogle who was also a part of the discussion agreed that Virat Kohli would get the scope to rediscover himself in Australia where the T20 World Cup is set to commence in October.

According to the top cricket news, Bhogle has remarked that Virat likes the pace, bounce and an aggressive environment. He likes balls that do not swing much and strikes the bat beautifully. Virat is capable of countering the deadly bowling lineup of Pakistan and would let his bat do the talking.

Going further into details, Patel has remarked that if Virat, Rohit and Rahul are playing then one among Rishabh Pant and Dinesh Karthik has to sit out. Thus, Virat should open with Rohit and Suryakumar Yadav should be at no. 3 and Rishabh Pant should be at No. 4 as he is a left-hander. The exclusion of Mohammed Shami has shocked the former wicket keeper and he feels that he is included in India’s T20 plans.

According to the latest cricket news, the 15th edition of the Asia Cup is about to begin from August 27 and will continue till September in the United Arab Emirates. The matches would be played between six groups with India, Pakistan and a qualifying team forming Group A and Bangladesh, Sri Lanka and Afghanistan forming Group B. This year the tournament will be played in the T20 format instead of the ODI format.