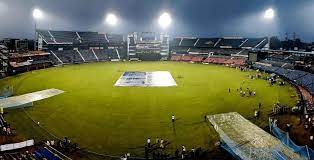 The Barabati stadium, situated in Cuttack, Odisha, has been a host to numerous international matches and the ground is of truly rich sporting heritage. It is the home ground of the Odisha team. It has also staged IPL matches. Even football matches have been held at the stadium.

The Barabati Stadium is an Indian sports stadium used mostly for cricket and association football, and also sometimes for concerts and field hockey, located in Cuttack, Odisha. It is a regular venue for international cricket and is the home ground of Odisha cricket team. The stadium is owned and operated by the Odisha Cricket Association. It is also used for Association Football. It hosts Santosh Trophy national football tournament and the state's Odisha First Division League football matches. The Barabati Stadium is one of the older grounds in India, having hosted several touring sides – including the MCC, the West Indies team and the Australians – before it hosted its first international match. It hosted only the third one-day international in this country, in January 1982, when India put it across England by five wickets to lift the series 2–1. It hosted its first ever Test match five years later where India played hosts to Sri Lanka. Though it isn't one of the regular Test venues anymore, it continues to enjoy the status of international venue and hosts One-Day Internationals regularly. It also hosted the 2013 Women's Cricket World Cup.

Over the years, the wickets have been noted for variable bounce and assisting the spinners. Tweakers like Anil Kumble, Narendra Hirwani and Maninder Singh have shone brightly. Hirwani taking a 6-for on a turner in the Test against New Zealand in 1995 gives an inkling about the deck helping the spinners. However, it has to be said that even the pacers have taken advantage of the variable bounce and on occasions, succeeded.

In ODI One Day International matches, the pitch here is excellent for batting first. In last 10 years only 3 matches played in which 2 matches won by batting first team  and 1 by chasing team. batsman enjoy there batting in this ground. Bowler not  getting too much help from this pitch.

the wickets have been noted for variable bounce and assisting the spinners. The average 1st inning score is 136 and the average second inning score is 91 in T20 cricket. Only 2 T20I matches played in this ground in which 1 won by batting first team and one chasing team

Team who bowled first won total 3 matches out of last 7 IPL matches at this ground and team batting first won 4 matches.if any won the toss in this ground than theey decided to bowling first.