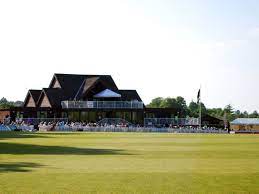 The ground is located 0.7 miles (1.1 km) south of Radlett to the east of the A5183 road, Watling Street. The Midland Main Line railway which links London St Pancras and Sheffield, runs along the ground's eastern edge.

This ground is a batting supportble ground.  All the matches that have been played so far in this ground have won by batting second team, whichever team is won the toss in this ground, they decides to bowl first.

In this ground 7 blast matches played in which 6 matches won by batting second team. if any team won the toss here than they decided to bowl first.

Here are last 5 BLAST matches average scores of both Innings at RADLETT ground: