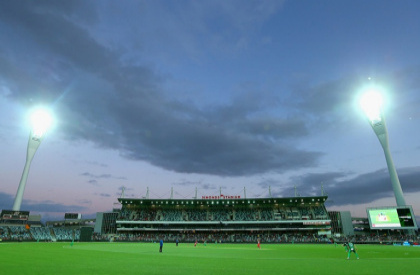 Kardinia Park (also known as GMHBA Stadium due to naming rights) is a sporting and entertainment venue located within Kardinia Park, South Geelong, in the Australian state of Victoria. The stadium, which is owned and operated by the Kardinia Park Stadium Trust, is the home ground of the Geelong Football Club and the A-League football club Western United FC. The capacity of Kardinia Park is 36,000, making it the largest-capacity Australian stadium in a regional city.

The pitch here is a flat surface which makes easier for the batsman to score runs as the ball comes straight to the bat, pitch is not much supportive for the slow bowlers as they don’t find any spin factors here at this ground. So, far the ground has just witnessed International and Domestic T20Is.

Here is the last 5 T20I matches average scores of both Innings at SIMONDS ground:

As we all know that the pitch here in Simonds stadium has a flat surface which makes easier for the batsman to score good runs and secure a good total for the other team to chase or defend. BBL matches here concludes the same. So far 6 matches held here where the team batting second won 4 and the team defending the total won 2. The pitch looked different last season as compared to all other seasons at this ground as the team who batted first secured a good total on the board and restricted the chasing team who failed to chase. So, we can expect the pitch to be more beneficial in coming seasons for both teams while chasing or defending.

Here are last 5 T20 matches average scores of both Innings at SIMONDS Stadium: