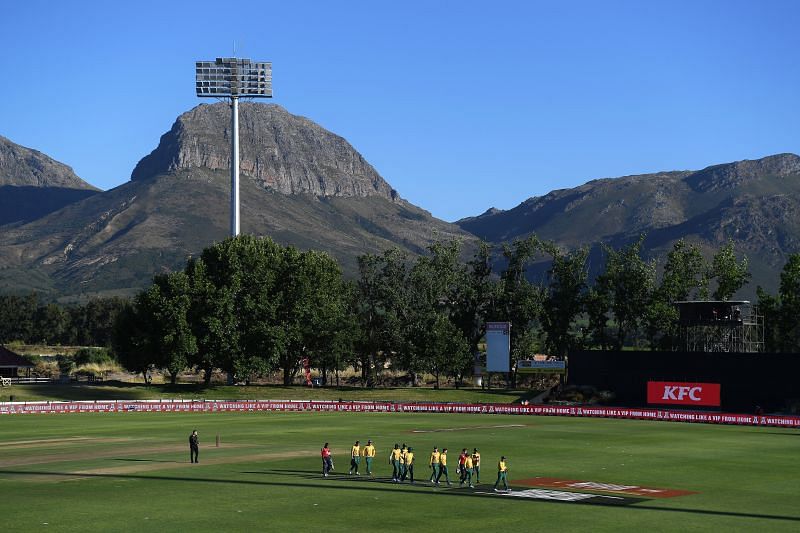 Boland Park is a multi-purpose stadium in Paarl, South Africa. It is currently used mostly for cricket matches and hosted three matches during the 2003 Cricket World Cup. Boland cricket team and the Cape Cobras both stage home matches at the ground. The stadium has a capacity of 10,000 people. The first ever ODI match was between India and Zimbabwe in 1997 during the Tri-Series which ended in a tie.On 11 January 2012, hosts South Africa beat Sri Lanka by a margin of 258 runs in an ODI. Sri Lanka were dismissed for a low total of 43, which is their lowest ODI total in their history. The following 2003 Cricket World Cup matches were played in Boland Park. A total of three matches were played at the venue during the 2003 World Cup.

It might be another good toss to lose with the ball expected to do a bit off the pitch up front though the bounce should be true.Generally though it is a good idea to bat first at boland park.The spinners may well come into the game later in the piece with then surface not expected to be as green.

Boland cricket stadium pitch is suitable For both batsmen and Bowlers. According to stats batsmen And bowlers have equal command on the pitch.

teams batting first have touched the 200-run milestone on every occasion. The average first innings score on this ground is 261 runs in ODI cricket,The conditions at Paarl will be best-suited for the fast bowlers.

there have not been too many high-scoring matches at Boland park. The boland park track is expected to be a batsmen’s paradise. There should be enough carry for the paceman who are willing to bend their back. Here are last 1 T20I matches average scores of both Innings at boland park grounds: