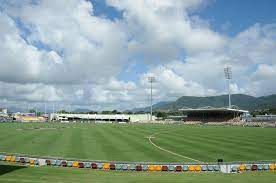 Cazaly’s Stadium is a sports stadium in Cairns, Queensland, Australia. It is situated in the suburb of Westcourt. The stadium is named after the social club which abuts the oval, Cazalys, which itself was named after Australian rules footballer Roy Cazaly.

With a capacity of approximately 13,500 people, Cazalys Stadium is the largest oval stadium in Cairns and features a main grandstand relocated from the Gabba, Brisbane in the late 1990s. It is used by the Queensland Cricket Association, Queensland Rugby League, and AFL Cairns. The stadium has hosted matches in the Australian Football League, National Rugby League, and A-League, as well as Test and One Day International cricket.

The pitch at the Cazaly’s stadium favors the pacers initially and tends to get easier to bat on as the match progresses. The pacers can get benefit from the good bounce and movement that the surface provides and pick wickets upfront. The batters will have to be cautious at the start of the innings. The overs of spin will be crucial as the pitch offers a good turn.

As there are not many matches at the Cazaly’s stadium but the teams chasing a total have had more success as compared to the sides defending. Hence, it would be a better option to bowl first after winning the toss here.

Cazaly’s Stadium has hosted just 3 Matches as of now where the team Australia won all of the games while batting and bowling first. Without a doubt the pitch can be considered as a batting pitch as per the runs scored in the previous match. The pitch here is covered with grass which helps the fast bowlers to find there swing and enjoy the pace of the pitch.

Here is the last match average scores of both Innings at Cazaly’s Stadium  ground: