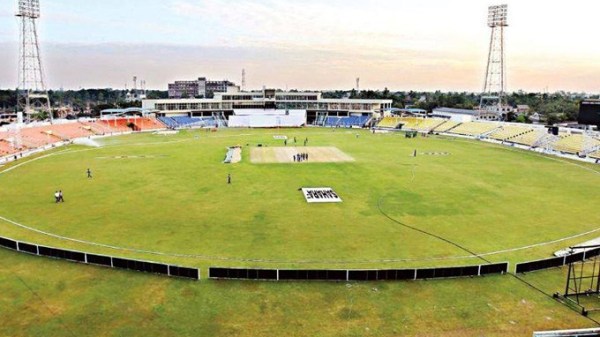 Khulna, situated in the south-western corner of the country, is the third-largest industrial centre in Bangladesh. The stadium holds 15,600 people and opened in 2004, as one of the five purpose-built cricket grounds established in the run-up to the 2004 Under-19 World Cup. It has a field dimension of 183 m X 137 m. It is the home stadium of the local Bangladesh Premier League franchise Khulna Titans. It was granted One Day International (ODI) status in January 2006. The stadium became the seventh Test venue in the country when it hosted the second Test between Bangladesh and West Indies in November 2012. The ground hosted its first Test match from 21 to 25 November 2012 when Bangladesh played against the West Indies, with the home team losing by 10 wickets. The first ODI, between Bangladesh and Kenya, had taken place on 20 March 2006. The stadium hosted its first Twenty20 International (T20I), between Bangladesh and Zimbabwe, on 28 Nov 2006, with the match being the first T20I to take place in Bangladesh.

The one Test here showed that batting long was not a problem. One imagines the toss winner will bat first and rack up as many runs as possible, and hope the deck deteriorates to help the bowlers. So far only 3 Test matches have been played at the Sheikh Abu Naser Stadium in last 10 years. According to 3 Test matches, this pitch is very ideal for batting for 3 to 4 days. Spin bowlers dominate on this pitch as they get help from the pitch too. Basically the pitch is very suitable for both batsman and bowlers as it’s seen in last matches whether it’s ODI TEST OR T20s the batsman as well as the bowlers dominated to the extent. The pitch has witnessed high scoring runs and ample of wickets in all the three formats .

The pitch at this venue proven to be beneficial for the batsman to play a long innings as it’s seen in the last 3 test matches where the batsman managed to secure good runs on board whether it’s the home team or the away team. It’s also seen that the bowlers also dominated at the same time by taking wickets. As of now the pitch witnessed 3 test matches in last 10 years where 1 match was won by away team West Indies against the home team Bangladesh and 1 match won by Bangladesh against Zimbabwe and 1 match was a draw which was between Bangladesh and Pakistan.Here are last 3 tests matches average scores of four Innings at Sheikh Abu Naser Ground:

Based on the last matches played here, we can say that the toss doesn’t play a key role as the pitch helps both the batsman and bowlers to play their roles as per there capabilities, as seen in the last 2 matches played at the venue in last 10 years which was between the home team Bangladesh and Away team West Indies where Bangladesh won both matches while batting first and bowling first with a good margin and the home team Bangladesh is still undefeated at these ground.

Here is the last 4 T20I match average scores of both Innings at Sheikh Abu Naser Ground: