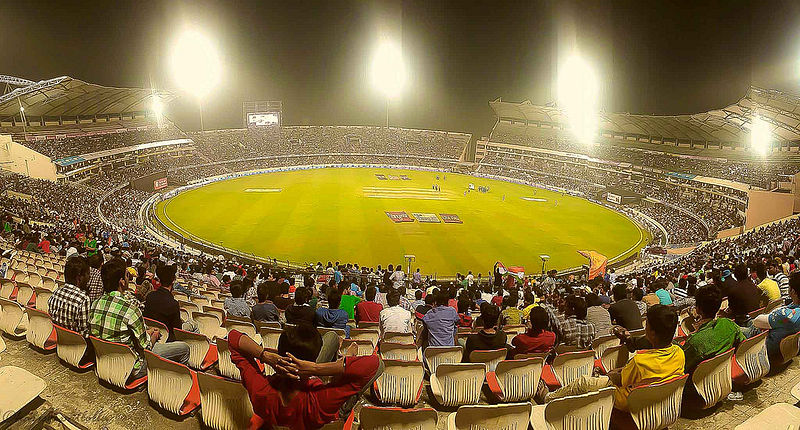 The Rajiv Gandhi International Cricket Stadium is a cricket stadium in Hyderabad, Telangana, India. Located in the eastern suburb of Uppal, it has a maximum capacity of 55,000 and extends across 16 acres (65,000 m2) of land. It serves as the home ground for the Hyderabad Cricket Association and the Indian Premier League team Sunrisers Hyderabad. As of 3 March 2019, it has hosted 5 Tests, 6 ODIs and 2 T20Is. This stadium hosted the opener and final of 2017 Indian Premier League, and also the final of 2019 Indian Premier League.

So far only five Test matches have been played at the Rajiv Gandhi International Stadium. According to five Test matches, this pitch is very ideal for batting for 3 to 4 days. Spin bowlers dominate on this pitch as they get help from the pitch in last days of the Test match because on fourth and in fifth day, due to the foot marks of the bowlers, the ball starts to turn more.

The team that wins the toss always decides to bat first here. If the first session is played well then there can be seen good first innings score. It is very easy to bat here for the first two to three days. The ball comes on the bat so that good shots can be played. But as the time passes, batting on this pitch becomes difficult as this pitch starts helping to spin bowlers. Also, the foot marks of fast bowlers give good turn to spin bowlers. Last 4 Tests played at the Rajiv Gandhi International Stadium, we can say that there have been very high runs in the first and second innings. The average of the third innings and fourth innings is very low because the bowlers start getting help from the Pitch, because of which in the third innings less and many times it has been seen that the match ends in the third innings if the teams have good spin bowlers.