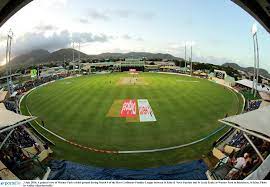 Warner Park Sporting Complex is an athletic facility in Basseterre, St. Kitts, St. Kitts and Nevis. It includes the Warner Park Stadium, which was one of the hosts for the 2007 Cricket World Cup. It is named after Sir Thomas Warner, the explorer who established the first English colony on St. Kitts.

The eastern segment contains the cricket pitch, pavilion, media centre and seating for 4,000 which can be increased with temporary stands to 10,000 for major events. The stadium was largely financed by Taiwan with donations totals $2.74 million. The total project cost US$12 million, half for the cricket stadium and half for the football facilities.

The western segment contains the football stadium, with seating for 3,500. In the northern section of the park, there are three tennis courts, three netball / volleyball courts, the Len Harris Cricket Academy, and a small open savannah, Carnival City, used primarily for hosting Carnival events.

The pitch in Warner Park tends to be a batting-friendly surface. The T20 records of Warner Park suggest that the bowlers had a tough time here. St Kitts has seen humungous totals being chased in the CPL. In the 7th edition of CPL, St Kitts and Nevis Patriots chased down a target of 242 in with 7 balls to spare. Hence, we must expect a lot of high-scoring matches in this ground.

The batters find it easier to strike the ball as the match progresses. Hence, the team batting second would generally be the one benefitting the most from the wicket here in the Warner Park Cricket Stadium.

Though it’s a batting friendly pitch, ODI teams prefers to bat first. The ground has dry pitch and it supports batsman and they enjoy batting at this pitch. Therefore, whoever won the toss mostly chose to bat first and as per the results out of 8 games hosted in last 10 years at the venue 7 games were won by the team batting first and just 1 game won by the team chasing the total.

Toss is not so important but according to the last CPL matches winning records, In last 10 years 79 CPL matches played in which most matches won by the side chasing the total as compared to the side batting first at the venue. The pitch supports both batsman and bowlers so it makes an exciting game with high scoring totals and lots of nail-biting innings and performances.