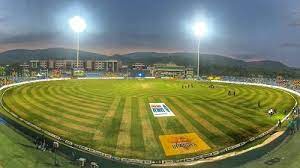 NPR College Ground is a cricket ground of NPR College of Engineering and Technology situated at Dindigul, Tamil Nadu. It is an artificial turf ground with a seating capacity of 5000 and flood lights. The ground has hosted 10 first class cricket matches and it is also a venue for Tamil Nadu Premier League tournament.

The Dindigul hasn’t been a high-scoring ground and the four matches so far this season have seen batsmen grinding out the runs. The spinners will have a good time more due to the fact that this will be the second match in two days on the same pitch.

The pitch in this ground has traditionally been low and slow. Batting may not be a cakewalk throughout the 40 overs. In the second half, the batters are likely to face more heat as the pitch may slow down. Batting first should remain the way forward for the teams.

Here are last 5 TNPL matches average scores of both Innings at NPR ground: