CBTF SPEED News
View All News
Home News We’ve no Authority to Question His Position’: Robin Uthappa Says Virat Kohli is One of the Best in the World 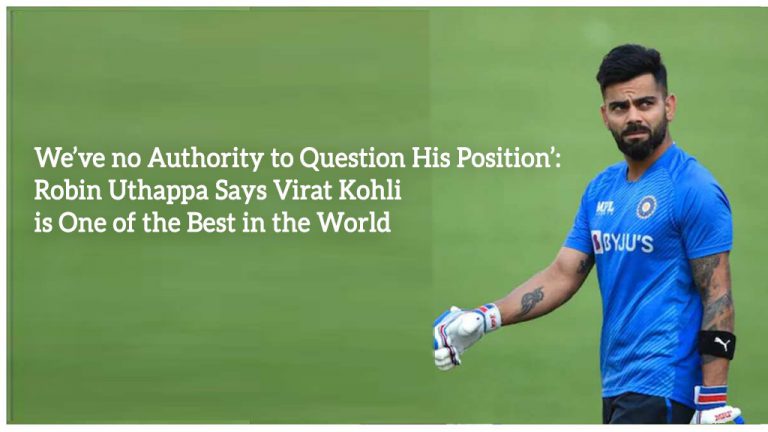 According to the latest news about cricket, Robin Uthappa, an Indian cricketer and batter for Chennai Super Kings, said on ‘CricChat Powered by Parimatch’ that there is no question of doubting Virat Kohli as he has proved himself as one of the best cricketers in the world. He added that Kohli would be able to solve his problems and return to his best form and he requested the critics to question the position of the former skipper in the team.

What Robin Uthappa Has to Say:

Uthappa lashed out at the critics of Kohli and said that it is unjust to question the place of the former captain of India in the team. He also requested the fans not to question Virat’s decision of taking a break between big series. Uthappa commented that no one advised Virat on how to play when he scored century after century. The star batter would once again gain his best form once he is able to understand and sort out his issues.

Uthappa expressed his opinion on whether the former Indian skipper should take a break from the game as he is in a bad shape. Uthappa has remarked that no one has the authority or any basis to question the capacity and position of Virat Kohli to win games as per the latest cricketing news.

Kohli has proven himself numerous times and is a match winner. He is one of the best in the world. Uthappa also added that Virat Kohli would be able to score 30-35 more international hundreds and his capability is unquestionable. Backing up Kohli, Uthappa said that no one should dictate to the former captain how to play or what to do.

Virat Kohli Not Being Able to Perform:

Virat Kohli is facing criticism from cricket fans as he is not being able to perform to his full potential. He is experiencing a slump with the batting and he scored his international century last in the year 2019. Since then he has been struggling to achieve a big score during the last 78 innings that he had played for India.

According to Virat Kohli news, Virat has been going through a rough patch for quite some time now across all game formats and Has struggled to score 45 runs through 4 matches in the series against England. Kohli is expected to regain his form in the long break that he took from the T20I series against South Africa before the Test specialists went to England for the 5th test in Birmingham that was rescheduled.

However, Virat Kohli failed to raise the bar and he managed to score only 11 and 20 in two innings of the test match that India, unfortunately, lost in July.

He had not been able to display his skills even during his tour of England. The 33-year-old had the opportunity to bat in six innings but could not secure a score of more than 20 runs in any instance. His lowest score in the series was 1.

Many cricket fans feel that Kohli should be dropped from the Indian team but the present captain of India, Rohit Sharma is in support of Kohli and does not want to drop him from the Indian squad. He has stated that Virat Kohli has so much experience in playing so many matches over such a long period. He has been a great batsman and requires no reassurance. He had also mentioned during his last press conference that form can fluctuate and go up and down. That is a part of the player’s career and it can happen with anyone. A player who has won so many matches needs only 1 or 2 innings. He also added that the others are of the same opinion.

Virat Kohli had been taking a break and is out of action as he chose not to play in the series against West indies. The selectors have decided to rest some of their star players such as Rohit Sharma, Rishabh Pant, Jasprit Bumrah, Hardik Pandya and Virat Kohli for the trip but all of them would be back for the five-match T20I series barring the Indian Captain. Follow us for the latest cricketing news!