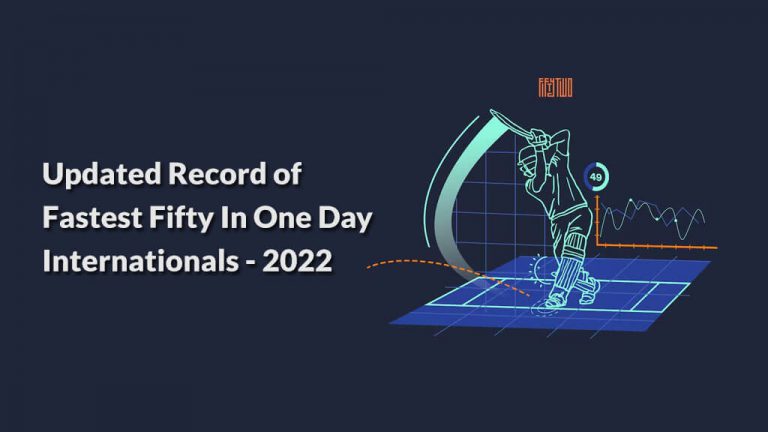 Fastest Fifty is an exciting game type used in One Day Internationals (ODIs), where unlike in T20s or Tests, a hitter must pace the inning in accordance with the situation. Sanath Jayasuriya held the record for the fastest fifty in an ODI, and he introduced power-hitting in the 15th over. With just 17 balls, Jayasuriya struck his One Day Internationals Fastest Fifty against Pakistan in Singapore. Now, AB de Villiers broke the records for both the Fastest 50 (16 balls) and the Fastest 100 (31 balls).

This list has been updated with the statistics as of 2022, and below we will mention the top 10 fattest fifty according to the current stats of cricket updates. Let’s now begin the tally of the quickest ODI half-centuries.

South African AB de Villiers is at the top of the list of players with the fastest fifty in One Day Internationals. The right-handed batsman and wicketkeeper broke the previous cricket records for the quickest ODI fifty by hitting a half-century in only 16 balls. This record was achieved in a match against West Indies on 18th January 2015.

Sanath Jayasuriya, a former left-handed all-rounder from the Sri Lankan cricket team, is next on the list. On April 7, 1996, while playing against Pakistan, he broke the record for the fastest half-century in One Day International cricket by scoring it in just 17 balls. The match was held in Singapore, and he scored 76 runs in total.

He scored five sixes and eight boundaries. Jayasuriya’s average strike rate in one-day international cricket is 91.20. His two-decade career has been one of cricket’s most notable, earning him a spot among the batsmen with the most ODI centuries.

Kusal Perera of Sri Lanka, who stands 5 feet 6 inches tall, is a big thing in a small package, holding the record for one of the quickest half-centuries in ODI cricket. On July 15, 2015, at Pallekele, he hit just 17 balls in a match against Pakistan before reaching the half-century mark.

He scored 63 runs in the match, becoming the third player after Jayasuriya scored 50 runs in 17 balls. His total included two sixes and thirteen fours. With all of his One Day International performances, he has a massive strike rate of 133.55.

He later scored 93 runs in the game and almost missed the century. He hit 9 fours and 8 sixes during his inning. His ODI strike rate is 87.58 percent. His double century in the 2015 World Cup is one of his major milestones.

Simon O’Donnell, a former Australian who played right-handed for his nation, is ranked fifth among players with the fastest fifty in One Day International cricket. In a game against Sri Lanka, the player hit the fastest ODI fifty of his career in just 18 balls.

On May 2, 1990, O’Donnell scored a total of 74 runs in the game, which was contested at Sharjah. His tally featured some incredible hits, including six sixes and four boundaries. O’Donnell has an 80.96 strike rate in one-day cricket matches.

One of the best all-rounders, ShahidSha Afridi, is once again on the list of One Day International players who have achieved fifty runs in the fewest balls.

On October 4, 1996, during an ODI game between Pakistan and Sri Lanka played in Nairobi, the former Pakistani star reached his first half-century in 18 balls. Afridi scored 102 runs in total throughout that match, including 11 sixes and 6 fours. A great show was once again put on!

The former Pakistani all-rounder Shahid Afridi again got a half-century in just 18 balls. This time, it happened during a game against the Netherlands on September 21, 2017, in Colombo.

Afridi scored just 55 runs overall in this game, including 6 sixes and 4 boundaries, giving him an incredibly quick half-century. It is not surprising that “Boom Boom” Afridi has been listed among the top fifty fastest players in One Day Internationals more than once.

Glenn Maxwell of Australia, who reached fifty in only 18 balls, moves up to eighth place on the list of ODI players with the fastest fifty. On November 2, 2013, a game against India was played in Bangalore. Maxwell only scored 60 runs during this match, despite being a show.

He made a quick half-century with 7 sixes and 3 fours. Maxwell had a phenomenal strike rate of 123.93 during his One Day International cricket career.

Right-handed Pakistani all-around batsman Shahid Afridi again achieved a half-century in 18 balls during a match between Pakistan and Bangladesh on March 4, 2014, in Mirpur. He hit two fours and seven sixes for 59 runs in that game.

Afridi’s insane batting style, which has always been a vision, is reflected in his one-day international strike rate of 117.00. He is among the batsmen with the most sixes in ODI cricket, which is a startling fact.

Brendon McCullum, a former star for New Zealand, moves up to the tenth position on the list of ODI players with the fastest fifty, scoring it in 18 balls. He made the goal against England on February 20, 2015, in Wellington.

The right-handed batting wicketkeeper in this game amassed 77 runs, including incredible strokes like the 7 sixes and 8 boundaries. The harsh but excellent Baz has a one-day international strike rate of 96.37 percent.

Stay connected with CBTF Speed News if you are interested in getting cricket updates or cricket news!