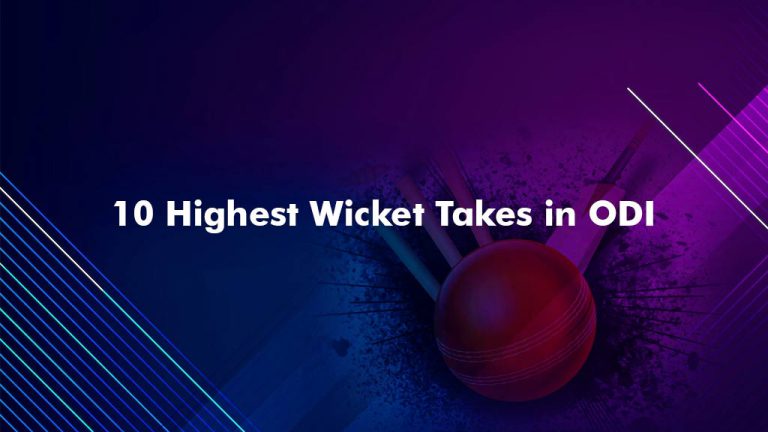 Every spectator sitting in the cricket pavilion eagerly waits for the ball to hit boundaries when batsmen hit a six or four. But do you know what’s the biggest fear of a batsman? It’s to face an aggressive bowler that has the power to send them to the green room back.

So, let’s gaze at the bowler who’s dominated the field by taking most wickets in ODI and has made their names.

1. Muttiah Muralitharan – Muralitharan has taken the most wickets in ODI cricket history, as well as in test cricket. From 1993 to 2011, he played ODI cricket for Sri Lanka and was among the most challenging bowlers to play. For his country, Murali has captured 534 wickets in 350 ODIs. With a stellar average of 23.08, he snatched 10 free throws. Muttiah was a member of the 1996 World Cup-winning Sri Lankan team.

2. Wasim Akram – The greatest left-arm fast bowler ever in ODI matches, Wasim Akram has taken the second-most wickets in history now. He represented Pakistan in ODI cricket for 19 years, from 1984 to 2003. For his unplayable swing balls, he was well recognized. Up to his last day on the pitch, Akram was a problem for the top players in the world. The 1992 World Cup saw the most wickets taken by The Sultan of Swing, who also contributed to Pakistan’s maiden World Cup victory. The highest 4-wicket hauls in ODI cricket history were taken by Wasim Akram.

3. Waqar Yonis – Waqar Younis, the King of Reverse Swing, comes in third for getting the highest wicket in ODI matches. After teasing the batters for 14 years, he hung his boots from the ODIs. Waqar has taken 416 wickets in 262 games, which is the second-highest total for a fast bowler in the format. With that ball, the Pakistani hero averaged 23.94 and went beyond the mark of 5 wickets 13 times—something no other player has previously accomplished.

4. Chaminda Vaas – Fast bowler Chaminda Vaas of Sri Lanka holds the fourth-highest wicket total (400) in ODI cricket history. The seasoned bowler, who represented Sri Lanka in One Day cricket for 12 years (1996-2008), was well-known for his swings and has always been regarded as one of the greatest ODI fast bowlers in history. One of the rare bowlers with more than 350 wickets in both ODI and test matches is Vaas. The greatest bowling performance by a bowler in ODI cricket history was 8/19 against Zimbabwe.

5. Shahid Afridi – On the list of players who have taken the most ODI wickets, Shahid Afridi is next on our list. In 19 years of bowling career, the all-arounder has been around (from 1996-2015) and was a superb googly bowler who used to bowl a little too quickly. In 398 games, he took 395 wickets at an average of 34.51. Afridi scored 8064 runs in 369 innings while at the plate. Despite having taken a combined 21 wickets during the 2011 World Cup with the ball, Afridi was unable to win the tournament after India eliminated Pakistan in the semi-finals.

6. Shaun Pollock – The sole South African bowler on this list of those who have taken the most wickets in ODI cricket is Shaun Pollock. He played in ODIs for 12 years (1996-2008). Pollock used to bowl at a speed of 125 to 130 km/h, but the batter struggled because of his line, length, and swing. Pollock demonstrated to the world that sheer pace is not necessary to succeed in international cricket. The 6.2-foot-tall pacer set a Proteas bowling record by taking 393 wickets in 303 games. Only one ICC competition—the 1998 Champions Trophy has been won by Pollock.

7. Glenn McGrath – The seventh highest wicket taker in ODI is Glenn McGrath on our list. McGrath also leads Australia in ODI wickets for the team. During his lengthy 14-year international career (1993-2007), took 381 wickets in 250 ODI games for an average of 22.02. Probably, the only bowler to win three World Cups is Glenn McGrath (1999, 2003 & 2007). You may find out how effective he was as a bowler by speaking with the greatest in the business, like Sachin, Lara, Inzamam, Jayawardene, Dravid, etc.

8. Brett Lee – The second bowler from Australia on the list is Brett Lee. He has taken the eighth-most ODI wickets. One of the world’s swiftest bowlers, he suffocated the batters with his unrelenting speed. He spent 12 years representing Australia (2000-2012). With his lightning-quick pace and 380 wickets in 221 games, Lee has terrified every batsman. His bowling average of 23.26 indicates how regularly he would provide a breakthrough for his team.

9. Lasith Malinga – Particularly in white-ball cricket, Lasith Malinga has dominated. He was renowned for his slower deliveries and yorkers. Malinga began representing Sri Lanka in 2015 and has taken the highest wicket in ODI for Sri Lanka. He could easily get through any batting order in the world using the slinger action. Malinga achieved the milestone in the 2007 World Cup match against South Africa and is the first bowler in history to take 4 wickets in the span of 4 deliveries in an ODI.

10. Anil Kumble – Anil Kumble has taken the tenth-most wickets in ODI matches worldwide and leads India in wickets taken. For more than ten years, Anil has been the bowling attack’s leader. A bowler who is unafraid and skilled can take wickets in any situation. He took 337 wickets in 271 One Day Internationals for India, with a respectable average of 30.89.

A Quick Overview of Most Wickets in ODI

These bowlers have created a history in ODI cricket history with unbeatable records in wicket-taking.