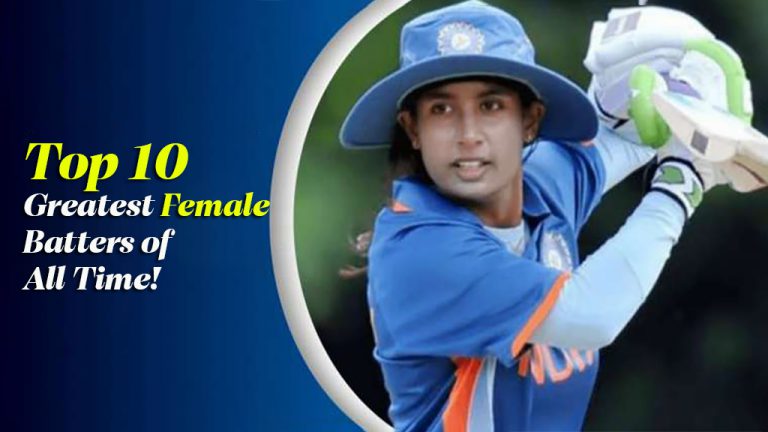 Cricket has a rich history of being a sport played mainly by men. But since the turn of the 20th century, cricket has introduced still another aspect to the gentleman’s game. In the new version of cricket, female players are allowed to participate and compete for their respective countries and national teams.

From Belinda Clarke to Fitzpatrick to Mithali Raj, Sarah Taylor to Smriti Mandhana, the game of cricket has been graced by several outstanding female batters.

Check out the greatest female batter of all time and follow us for more cricket updates.

In Indian cricket history, one of the best female batters. Mithali Raj has been outstanding since making her ODI debut against Ireland at 19, when she hit an undefeated 114 runs, amassing over 8000 runs in international cricket.

In 2001 at Lucknow, she played her first test against South Africa. When she scored 214 against England in the third test match, Mithali Raj broke Karen 209*’s previous record for the highest test singles score.

She captained the Indian women’s team to the 2005 Women’s Cricket World Cup finals, where Australia defeated them. Raj is the only captain to have led the team in ODIs and T20s most of the time so far in history.

She received the Arjuna Award in 2003, and fans considered her one of the greatest female cricketers of all time. She has averaged over 50 in both test and one-day cricket, while her T20 average is 37.

The second-best female wicketkeeper batter in the history of cricket is unquestionably this player. Taylor currently holds the record for being the fastest female batsman to play 1000 ODI matches. Taylor, a professional wicketkeeper, frequently started batting first for England and guided them to historic wins over Australia.

Taylor has amassed over 6000 runs across all formats in international play, making him one of England cricket’s most productive batters ever. In 2009 and 2019, Taylor was a team member that won the T20 global championship. She deserves to be ranked second among the top 10 female batters.

The former batter who competed between 1991 and 2005. In 1997, Clarke became the first player to record a double century in limited-overs cricket (the fact fewer people know it). Clarke, known for her strong batting, helped Australia win the world cup twice.

Clarke averages above 45 in ODIs and Tests and has amassed over 5500 runs in international cricket. For nearly 20 years in limited-overs cricket, Clarke held the record for a double century and was Australia’s top ODI run-scorer. It would be unfair not to give her the third spot on the list of the top 10 female batters of all time, given all her incredible accomplishments. Follow for the latest cricket news or cricket Samachar!

If there was a cricketer who revolutionized the perception of England women’s cricket before Sarah Taylor, it was Charlotte Edwards. At age 17, she was the youngest to captain England.

Under the outstanding leadership of Charlotte Edwards, England women’s cricket has had enormous success. During Edwards’ captaincy, three Ashes championships, a T20 World Cup, and a 50-over World Cup occurred.

If there was a female cricket superstar in New Zealand before Suzie Bates, it was Debbie Hockley.

New Zealand never experienced a test series loss while she served as captain. She owns two records in World Cup history: the most runs by a woman featured in the competition (1501) and the most appearances in five world cups.

Has more than 7000 runs in ODIs and T20s for New Zealand. Bates averages above 40 in ODIs and has scored 3214 runs overall, surpassing the previous record-holder Charlotte Edwards (2605).

The left-handed batter and former captain of Australia participated in two successful world cup campaigns for her country. Karen Rolton never had an average of 47 runs across all formats in her 6000 international runs.

In 2006, She was named captain following the expiration of Belinda Clarke’s captaincy. After 14 years of playing, she declared her retirement from cricket in 2010.

The popularity of women’s cricket and its plethora of memorable moments can be widely attributed to these top female batters. The fans are hopeful that more outstanding women will enter the cricket field and pick up the bat, hitting their way into history. These female batters have contributed to some spectacular moments in cricket. Keep an eye out for more information regarding the cricket updates and the latest cricket news.