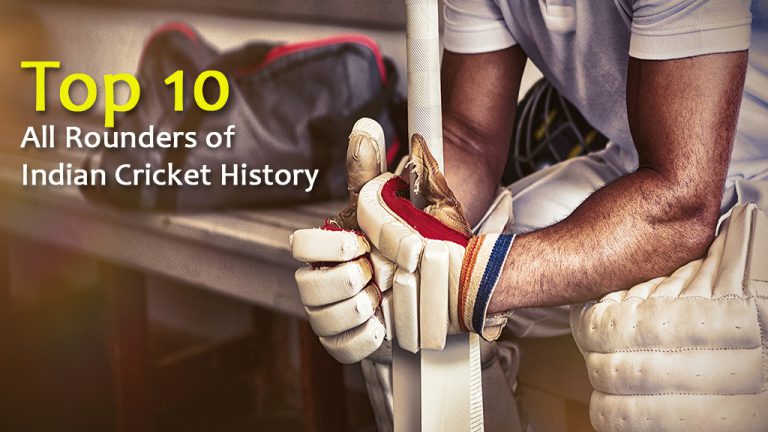 An all-rounder is a player that performs equally supreme batting, bowling, and fielding on the field. Searching for the best all-rounder is like finding a needle in a haystack, and has almost been an alien term to the cricket world.

There are names associated with cricket history that not performed well during batting and hit the out of the boundary but also ball in a very impressive way and get maximum wickets.

So, with that in mind, here we present you with the best Indian all-rounders of all time and become cricket headlines.

One of India’s most significant recent match-winners is Pant. Though he first gained notoriety for his performances in the T20 format for the Delhi Capitals (formerly known as Delhi Daredevils) in the Indian Premier League, his Test record has received much praise.

Pant has also played in 54 T20I games, where he has amassed 883 runs at a 23.86 average. He has three half-centuries in the format, and his best score is 65*. He is the team captain for Delhi Capitals in the IPL.

Top 10 Indian All Rounders – Best of all Time

Who will be at the top of this list other than Kapil Dev? An all-rounder of the caliber of Kapil was never even close to being produced in India. He was the definition of courage and strength, and he may perhaps be remembered as one of India’s finest athletes.

The former captain ranks third among Indian Test wicket-takers. Out of everything else, the 1983 World Cup victory was the one that gave him the halo. With his special skills, and hard-core training he proved himself a great bowler, batsman, fielder, and captain.

Hardik Pandya entered the 2015 IPL season without any prior experience playing at the highest level. The slim T20 specialist was introduced by Mumbai Indians, a team noted for introducing unexpected players.

He bowls at a medium pace and possesses explosive power in his bat. In his debut IPL season, Hardik Pandya attracted notice and earned a spot in the 2016 T20 World Cup squad. In the 2017 Champions Trophy final against Pakistan, Hardik Pandya’s lone-warrior innings did demonstrate his value to India.

A great all-rounder with a left arm who could bowl and bat both ways entered the Indian team and had an immediate impact. He did so in the first three balls of a test match, becoming the first Indian bowler to do so.

He was an obvious pick to play for India’s winning 2007 T20 World Cup team after learning how to knock rapid boundaries late in the innings. As per cricket latest news, he was even given the Man of the Match award in the championship game. However, his IPL career never grew and this steep decline caused his international career also.

Lala Amarnath is a well-known name among us, although we have limited access to the cricket matches that took place before India’s independence. Additionally, he is India’s first independent captain. Amarnath amassed 878 runs and 45 wickets in 24 test matches. Lala Amarnath, one of the earliest Indian all-rounders, made an enduring impact on the squad and the sport of cricket in India.

Manoj Prabhakar arrived as a medium pacer with a right arm and made his debut abroad in 1984. He was primarily deployed as an economical bowler to put pressure on the opponent rather than as a strike bowler. Nevertheless, he amassed a total of five 5-wicket hauls in his career, spanning the forms of Test and ODI. He took 96 wickets in 39 Test matches and 157 in 130 ODI games. As his career progressed, Prabhakar amassed a total of 20 half-centuries and 3 centuries, which revealed his batting prowess.

Mohinder was well-known for his return performances and was a more expressive all-arounder than his father Lala Amarnath. He was recognized as the Man of the Tournament and the Man of the Match in the semifinal match against England for his contributions to the success of the 1983 World Cup. It was amazing to see how he developed from a good medium-fast bowler to a superb top-order batsman. He bats with a remarkable average of 42.5 in tests and 30.54 in one-day international cricket. Mohinder Amarnath was among the best of his era, with 37 half-centuries and 13 international centuries.

Ravi Shastri altered the game in a way that went against its natural course. Even though batters started to score runs more quickly, he was successful because of his defensive strategy and the high scores he obtained when playing against formidable opponents. He was one of the uncommon athletes who bats right-handed and bowls left-arm orthodox. However, Ravi Shastri occasionally became so merciless that he continued to strike six sixes against Baroda in a single over. The quite excellent numbers of 3108 runs and 129 wickets in ODIs and 3830 runs and 151 wickets in test cricket speak for themselves.

Everyone is familiar with Vinoo Mankad’s “Mankading” method of removing a batsman from the game. However, no one is aware of his excellent all-around abilities. There were 2109 runs and 162 wickets taken in the 44 Tests he played. His accomplishments include eight 5-wicket hauls, two 10-wicket hauls, two double-hundreds, and five hundred. Mankad and Pankaj Roy completed a 413-run opening stand in the 1955–1956 series against New Zealand, setting a 52–year record. One of the unfortunate players who had to compete before the advent of TV is Vinoo Mankad.

Ashwin’s career has been a rollercoaster since he first entered the spotlight as the star spinner for CSK. He took Harbhajan Singh’s place in the Indian team and successively set new Test cricket records. Ashwin, a street-smart cricketer, created several variations across all formats to confuse the batsmen. Ashwin was able to score five test hundreds while batting at the bottom of the order. No one was able to match his test supremacy, although he was one of the players who lost his spot in the ODI and T20 team because of the excess spinners in India.

Jadeja, who supported Virat Kohli as the second captain during the Under-19 World Cup, had a difficult time earning a berth on the Indian side. Although Jadeja is still developing as a limited all-rounder, his pairing with Ravichandran Ashwin in tests is lethal. In ODIs and T20s, Jadeja makes those brief appearances to help his team to a respectable total, but his 77-ball performance in the World Cup 2019 semifinal changed the course of his career.

Getting an all-rounder is a boon to the Indian cricket team. Special abilities, skills, and day-night training make them call all-rounders of the team.

Also Read: Cricket Lovers Get The Latest Updates On CBTF