CBTF SPEED News
View All News
Home Asia Cup News “To Fix The No. 4 Position For A Specific Player, We Need To Get The Balance Of the Side Correct” – Saba Karim: Asia Cup 2022 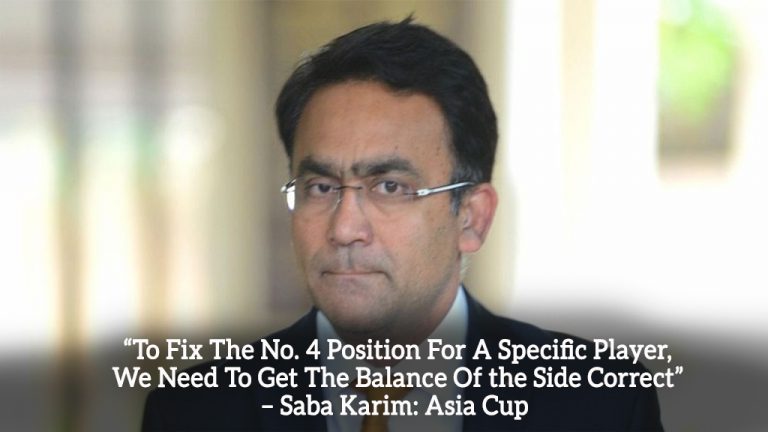 According to the latest cricket news today, India has announced their 15 member squad for the Asia Cup 2022. Virat Kohli returns to the squad but Jasprit Bumrah is rested due to back injuries. Amidst speculations and opinions, Saba Karim has ignited the No. 4 debate.

Saba Karim, the former Indian National cricket team wicketkeeper-batsman commented that Rohit Sharma and the Indian squad needs to fix their No. 4 batter for the T20I quickly and for that purpose team India should get the balance right.

Many players have been put to bat at the No. 4 position in the T20Is and the most successful player amongst them has been Suryakumar Yadav. But with all the top 3 batters of India, that is Rohit Sharma, Virat Kohli and KL Rahul, being right-handers, there arises a necessity for a left-hander batter in the middle order. In the recent matches, Rishabh Pant has played at the No. 4 position to strike a balance as he is a left-hander.

Pant has been the chosen wicketkeeper-batter for India in the T20I cricket and the management have switched between Sanju Samson, Ishan Kishan and Dinesh Karthik in his absence. The youngster was made to open in the T20I series on the tour of England. However, India has relied upon Dinesh Karthik as a finisher in recent times but as Virat Kohli and KL Rahul returned to the squad, karthik might have to miss out if both Pant and Suryakumar are to be incorporated in the playing 11.

What Saba Karim Has to Say:

As per the cricket news, when Saba Karim had been asked whether the No. 4 position can become troublesome for India, he agreed that the Indian squad needs to finalize the No. 4 position as soon as possible. But for fixing the position, India needs to get the balance of the side right. He further adds that he implies that India should choose between Dinesh Karthik or Rishabh Pant on the Sports 18 show ‘Sports Over The Top.

Once the decision has been made between the two then it can be convenient to put Surya at No. 4. The team management can decide which is the best position for Suryakumar Yadav from which team India can benefit. If the management thinks that No. 4 is suitable for him, then the rest of the batting order can follow.

Saba Karim, the former national selector, further added that Rohit Sharma wants five proper bowlers in the squad alongside Hardik Pandya, who is an all-rounder.and comes in as the 6th bowler. Putting Dinesh Karthik at No. 7 would ruin the balance in the line-up and he explained that India has performed well with five bowlers along with Hardik Pandya as the sixth bowler in the past. It would not be a good idea to break such a combination to get another batter, that is Dinesh Karthik, at No. 7. This implies that Hardik Pandya would be the fifth bowling option who would get the chance to bowl four overs. India can find balance only by choosing between Rishabh Pant and Dinesh Karthik. Saba Karim feels that the balance of the line-up would be destroyed if Karthik is chosen as an additional batter, according to the latest cricket news today.

Karim spoke for Suryakumar Yadav for taking up the No. 4 position and Suryakumar is amongst the seven batters who have played at the No. 4 position since the last World Cup and has scored 195 runs, having a strike rate of 198.97 along with a century. However, recently in a series against the West Indies, he was asked to open the innings for India and it resulted in a great debate. Follow us for more cricket updates!