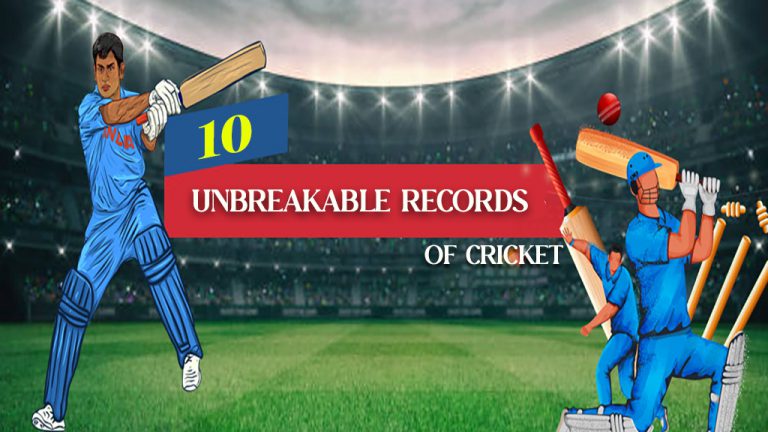 “Records are made to be broken,” – said many well-known philosophers and experts. But, some records are unbeatable. Cricket, England’s national game, gained popularity in almost every country. This game has been played for many years, and in cricket history, different players have seized many records. Some of them are even impossible to break. This post will highlight ten such records that are unlikely to be broken ever.

Only one bowler has ever amassed 8 wickets in an innings of ODI cricket. Chaminda Vaas of Sri Lanka accomplished this on December 8, 2001, being the first and only ODI bowler to do so. The left-arm bowler set a world record that is still in effect by bowling an astounding 8/19 in eight overs. The shortest ODI match to be completed saw Sri Lanka defeat Zimbabwe for 38 runs in 26 balls after Zimbabwe crumbled to that total.

On December 17, 1992, West Indies pacer Phil Simmons bowled the most economical ten-over session in One Day International cricket history against Pakistan in Sydney. Simmons had an economy of 0.30 while bowling eight strikeouts and only allowing three runs. Simmons finished the game with numbers of 10-8-3-4, helping his team to victory.

Every few years, a bowler has a freak match when he destroys the opposition, taking every single wicket lost throughout that inning.

It almost seems ridiculous that you could do it twice in one game. But Jim Laker almost did that in 1956 at Old Trafford when playing against Australia. The off-spinner collected nine wickets for 37 runs in the first innings, but he went one better in the second innings by taking 10 for 53. Despite falling short of a perfect return, Laker’s incredible match total of 19 for 90 will undoubtedly never be surpassed.

Only two bowlers in the history of international cricket have accumulated more than 1000 wickets. Firstly, Muttiah Muralitharan and then Shane Warne. Murali claimed 1347 wickets, 800 in Test matches, and 547 in the white-ball formats, whereas Warne was only able to get 1001 wickets. Today, a bowler is far from approaching Murali’s record and does not even consider claiming a thousand wickets in international cricket.

In first-class cricket, Sir Jack Hobbs of England scored 61,237 runs with an average of 50.65 and scored 197 centuries. He participated in 61 Test Games. Other players have contested the statistics of Hobbs’ cricket. Still, you will be surprised to know that batters like Sachin Tendulkar, Rahul Dravid, Sunil Gavaskar, Ricky Potting, and Brian Lara no one has reached to get highest runs in first-class cricket.

Don Bradman retired from Test cricket 72 years ago, yet his record for the highest batting average in Test cricket has not yet been beaten and seems unlikely. Bradman had an average of 99.94, whereas Graeme Pollock of South Africa is the next-highest batter on the list of top averages, and Pollack has a 60.97 batting average. Bradman’s Test average of 99.94 has been considered one of the greatest feats by any athlete in any sport and is a significant part of a cricket legend

You might be astonished to know that this seasoned English cricketer has played in 1110 first-class games and is the only player in the history of cricket to surpass 4000 wickets. Breaking this record is pretty far away, and no bowler in the past 30 years has even managed to crack it. This wicket tally is simply unbelievable. Four thousand two hundred four wickets, 287 five-wicket hauls, and 68 10-wicket hauls.

In the IPL barely 7 years ago, Chris Gayle made the T20 fastest century by smashing a century in 30 balls. A score of at least three runs is needed on every ball to break Gayle’s record, and it would be quite tough to even consider breaking this record in such a circumstance. The previous fastest century in T20 was made in 2004 by Andrew Symonds, an all-rounder for Kent.

In 1990, Graham Gooch beat Team India to set this record. In the first inning, he scored 333 runs, and in the second, he scored 123 runs. He broke Greg Chappell’s 380-run record, which he set in Wellington in 1973–74 when he scored 133 runs for Australia against New Zealand while making 247 unbeaten. After that, Brian Lara also set a record by scoring 400 runs in an inning, but neither he nor any other batsman has been able to break it thus far.

10. Most Balls Delivered in A Single Inning – Sonny Ramadhin

Sonny Ramadhin’s herculean efforts against England in 1957 at Edgbaston must have necessitated mentioning here. The second inning saw the spinner produce an astounding 98 overs; the most ever bowled in a single inning. Ray Price of Zimbabwe slogged through 79 overs in a 2001 Test match against South Africa, which is the closest anyone has recently been.

There are numerous additional cricket records, like Sunil Narine’s maiden in a super over and Rohit Sharma’s 264 runs in ODI. However, we chose these records over the top ten unbreakable ones in cricket because we believe they will remain unbroken for the foreseeable future. For more cricket updates, cricket records, the latest cricket news, and much more explore CBTF Speed News right away!