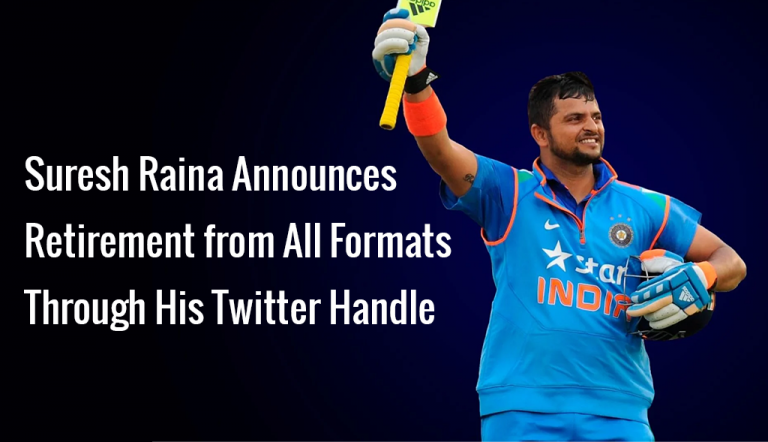 Suresh Raina, the former Indian all-rounder, made a big announcement regarding his retirement through his Twitter handle.

Through his tweet, he made it clear that he is retiring from all the formats of Cricket. He tweeted, “It has been an absolute honor to represent my country & state UP. I would like to announce my retirement from all formats of Cricket. I would like to thank @BCCI, @UPCACricket, @ChennaiIPL, @ShuklaRajiv sir & all my fans for their support and unwavering faith in my abilities.”

Raina was amongst the most prominent faces in IPL, but this year no bids were placed by any team to have the service of the distinguished player. Despite his marvelous games in the past for the team, even Chennai Super Kings abandoned the player.

“I want to continue playing Cricket for two or three years. Some exciting youngsters are coming through the ranks of Uttar Pradesh cricket. I have already taken my No Objection Certificate (NOC) from the Uttar Pradesh Cricket Association (UPCA). I have informed BCCI secretary Jay Shah and vice-president Rajiv Shukla about my decision,” Raina said the same to some media houses during an interaction.

Suresh Raina will join the team led by Sachin Tendulkar in the upcoming Road Safety World Series. The same is supposed to begin on September 10.

Raina had a fantastic run and was part of the team that won the 2011 World Cup. The departure of the player from the game is not good news, and the player also contributed by making serious contributions to the team in the international games at the time of need.