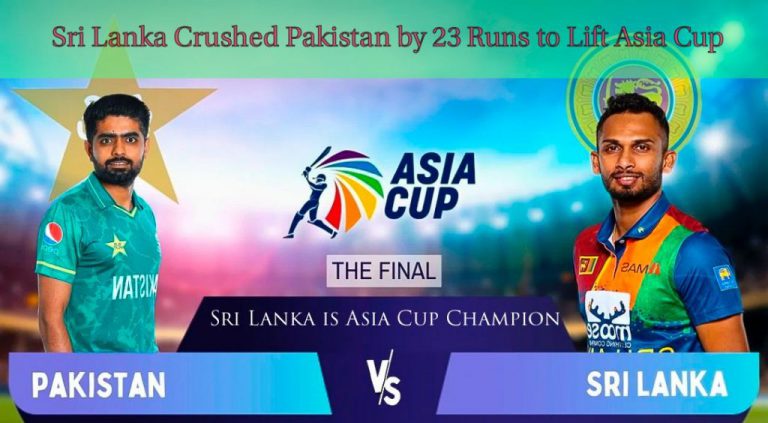 Pakistan skipper Babar Azam won the toss and opted to field against Sri Lanka in the final of Asia Cup 2022 at Dubai International Stadium. Shadab Khan and Naseem Shah have been re-inducted into Pakistan XI. Sri Lanka continued with the same team. In the tournament’s group stage, both teams only dropped one of their three games. In the Super 4, they reached to Asia Cup 2022 Final game after defeating Afghanistan and India.

In the final Super 4 game on Friday, Sri Lanka defeated Pakistan by a margin of five wickets. The Sri Lanka Team has won the Asia Cup five times since its inception in 1984, while Pakistan has done so twice. It will be intriguing to see which team wins and takes the championship.

Following their regular team huddle, the Pakistani players disperse throughout the park. The two Sri Lankan openers, Pathum Nissanka and Kusal Mendis come out to bat. For this finale, there are many fans present. The first ball belongs to Naseem Shah. After a superb start from Pakistan, Nassem Shah scrambled the golden wicket of Sri Lanka’s in-form opener Kusal Mendis. Four runs and a wicket in the first over, not a start Sri Lanka would have wanted for this final.

After the powerplay, Sri Lanka scored 42 runs and lost 3 wickets. Pakistan credited the two most important wickets in their account of Dhananjaya de Silva and Dasun Shanakain. They have lost half of their side inside 9 overs.

Pakistan Squad needs 171 runs in 20 overs to win the Asia Cup 2022 Final. Pakistan inning started, and Babar Azam and Mohammad Rizwan entered the crease. Left-arm pacer Dilshan Madushanka opened the attack for Sri Lanka. The pitch condition was not in favor of Sri Lanka, and Madhsanka had to make 11 deliveries in the first over. Sri Lanka’s first over turned out to be an expensive one. While on the other hand, Pakistan took advantage of this and scored 12 runs.

Pramod Madushan came into the strike and credited two back-to-back wickets of Babar and Fakhar Zaman in the account of Sri Lanka in 3.2 overs, giving a big smile on the face of Sri Lankans. Not the best start for Pakistan as they lost two wickets early and managed just 37 runs in the power play.

Mohammad Rizwan became the ray of hope and took Pakistan to 50 runs with a single in 7.3 Overs. The tremendous partnership of Rizwan and Iftikhar helped Pakistan turn the game on their side. The players played extremely well, hitting boundaries and winning singles and doubles to drive the game forward.

Sri Lanka Team was chasing a wicket for a long time and finally got an important wicket of Iftikhar. Pramod Madushan smacked the wicket and dismissed Iftikhar at 32. One more valuable batter of Pakistan, Nawaz, was caught out and had to leave his inning, scoring only 6 runs. However, Rizwan reached his half-century with a six in Pakistan Vs Sri Lanka Asia Cup 2022 Final. But just after his half-century, he lost his wicket, caught out by Wanindu Hasaranga.

Mind-blowing bowling from Sri Lanka, smacked one after another wicket in the last 4 overs and won the match by 23 runs.

To get the latest cricket news and update, stay connected with CBTF Speed News.