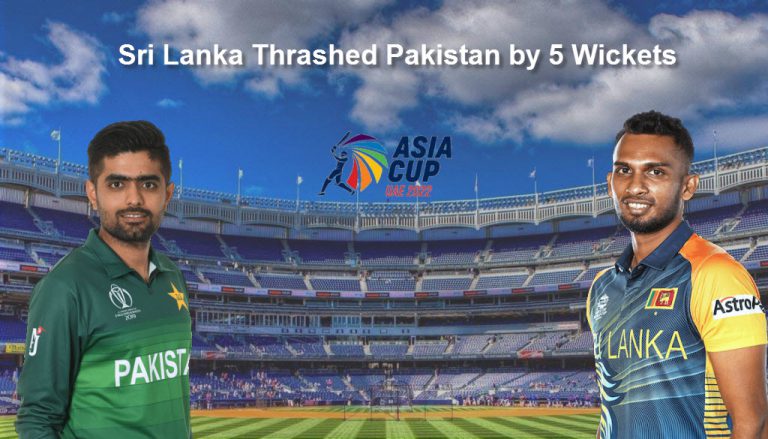 Summary – Sri Lanka made its impeccable win against Pakistan with a scoreboard of 125/5.

Following Mohammad Rizwan’s emission, Pakistan resumed playing to some solid strikes from Babar Azam and Fakhar Zaman. Captain Dasun Shanaka chose to field against Pakistan after winning the toss. Shadab Khan and Naseem Shah will not play for Pakistan since Usman Qadir and Hassan Ali were selected for the starting lineup. This match will warm up for Sunday’s championship game.

Both teams defeated India and Afghanistan to go to the championship match of the competition. Babar Azam, Pakistan’s captain, will try to compensate for his recent lack of performance in today’s game. The pitch of the ground has become quicker and easier to bat on as the tournament progresses. There will still be turns for the spinners. Which side will put their best foot forward will be intriguing to witness.

Pakistan openers Babar Azam and Mohammad Rizwan have entered the crease, and Dilshan Madushanka opens the Sri Lankan bowling attack. At the end of the powerplay, Pakistan’s score read 49/1. Debutant Pramod Madushan gave Sri Lanka their first breakthrough as he dismissed Rizwan for 14 runs. Hasaranga bowled fantastically after the powerplay and scalped the most important wickets of skipper Babar Azam. Prior to that, he caught a catch on the boundary line to dismiss Fakhar Zaman on Chamika Karunaratne’s delivery. In the 15th over, he took two wickets of Iftikhar Ahmed and Asif Sli, one after another ball. After that, he caught another catch against Hasan Ali.

After smashing some big hits, Nawaz gets run out by Kusal Mendis in the greed of a double. Pakistan’s score read at 121/9 after 19.0 overs, and Madushan puts the last nail in the coffin and dismisses Haris Rauf to bundle Pakistan at 121.

After a beautiful bowling display, Sri Lanka now needs 122 runs to win. Sri Lanka faces an early blow as Mohammad Hasnain dismisses Kusal Mendis. Haris Rauf takes Danushka Gunathilaka’s wicket, and after 1.2 overs, Sri Lanka is suffering at 2/2, Mohammad Rizwan’s simple catch behind the stumps. After facing early blows, Pathum Nissanka finally hits two back-to-back fours on Hasan Ali. After the power play, Sri Lanka’s score read at 37/3. Sri Lanka lost their important wicket of Bhanuka Rajapaksin, taken by Usman Qadir in the 11th over. However, he has given a great contribution of runs to the team.

Nissanka got his 7th half-century in Sri Lanka Vs Pakistan Asia Cup 2022 Super 4, giving the biggest smile to Sri Lanka fans. Pakistan successfully scalped another important wicket of Dasun Shanaka in 16th over. However, Sri Lanka made it and won the match with 124/5.

For the fastest cricket updates, stay connected with CBTF Speed News. We will ensure you never miss any latest cricket news about Asia Cup 2022 and any other cricket, even with our 24*7 speedy cricket news.