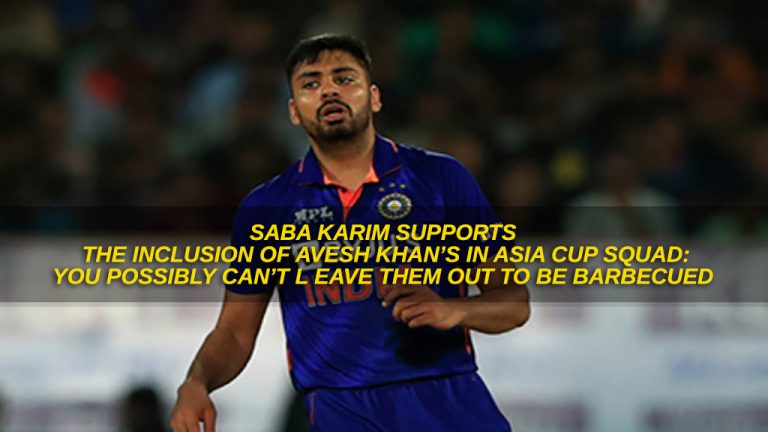 Saba Karim, a former selector, has supported the inclusion of Avesh Khan in the Asia Cup squad and has said that one cannot leave out young players to be barbecued after supporting them. India has announced their 15 member squad for the Asia Cup tournament that is supposed to commence from 27th August in the United Arab Emirates. Star players like Virat Kohli and KL Rahul are back on the team whereas the likes of Jasprit Bumrah and Harshal Patel have been seated owing to injuries.

However, the exclusion of Mohammad Shami has given way to great debates. The Indian team management has chosen three well-reputed pacers. They are Bhuvneshwar Kumar, Avesh Khan and Arshdeep Singh. Avesh Khan has taken 11 wickets in 13 T20Is so far whereas Arshdeep Singh has taken 9 wickets in 6 matches and also has a better economy rate compared to vesh.

Most cricket fans were shocked as Mohammed Shami remained excluded from the team and Avesh Khan replaced him in the team. India’s bowling unit consists of Ravindra Jadeja, Ravichandran Ashwin, Yuzvendra Chahal among the spinners. As far as the pacers are concerned, Bhuvneshwar Kumar is the most-senior and is accompanied by Avesh Khan, Arshdeep Singh and Hardik Pandya.

What Saba Karim Has to Say On Avesh Khan:

According to the latest cricket news today, Saba Karim, former Indian wicketkeeper, on Sport 18 show ‘Sports Over The Top’ said that once youngsters like Khan are supported, you cannot leave them in the middle, upon being asked whether he was surprised at the exclusion of Mohammed Shami from the team. He feels that the team management has a plan for him and would not abandon him if he cannot perform in the tournament.

According to cricket updates, Karim also added that once the country has invested in young players like Avesh Khan, you cannot leave them to be barbecued. These youngsters have not done anything wrong. He says that he understands that keeping Mohammad Shami out at such a crucial stage is a great risk, especially at a point when Bumrah is out with injuries. But he feels that the selectors want to continue with the youngsters and put their faith in them. He backed the youngster in spite of his poor performance in three consecutive matches.

Karim also added that he was happy with the decision that the existing selection committee took as the Indian team for the Asia Cup looks quite balanced. He remarked that selecting the players to make a squad is a tough job and he is happy with the present team. It is a solid state and they have selected players who have the ability to match Rohit Sharma’s tactics and plans. He feels that Chetan Sharma & Co have done a commendable job by selecting players to balance the team line-up. The selectors wanted to provide security to Avesh Khan.

The selection of Avesh Khan in the team was not welcomed by many cricket fans and critics. Avesh has given out 54 runs in only 6 overs in his debut ODI and did not have a pleasant time in the two T20 matches he had played in the series against West Indies and has registered figures of 1/31 in 2.2 overs and 0/47 in 3 overs. However, in the 4th T20I, he played well and earned the ‘Player of the Match’ award.

India is all ready to take on Pakistan on August 28th in the 15th edition of the Asia Cup and the two teams would also face each other again in the Super 4 if they qualify. According to cricket news, Rohit Sharma is leading the men in blue and KL Rahul has been chosen as the vice captain. Virat Kohli, the former captain, has also returned to the team and fans are highly hoping for him to get back to his run-scoring form. Follow us for more information related to the latest cricket news today!

Also Read : To Fix The No. 4 Position For A Specific Player, We Need To Get The Balance Of the Side Correct” – Saba Karim: Asia Cup 2022