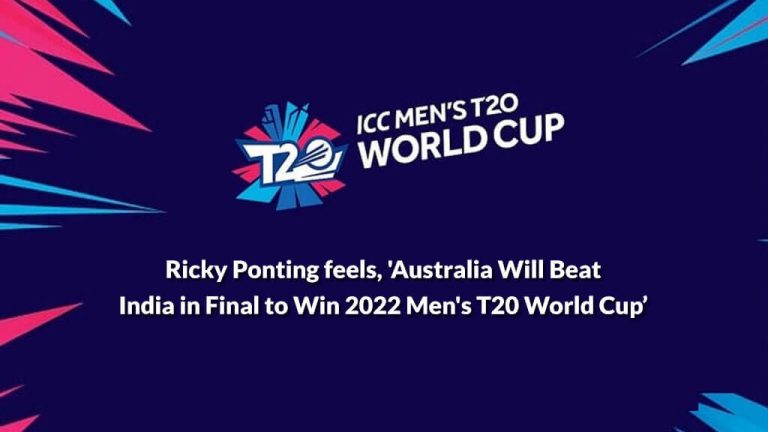 According to cricket news now, Ricky Ponting, the former skipper of Australia, feels that the host, Australia and India would play in the final of the ICC Men’s T20 World Cup later in October. He feels that the Australian team, who are the defending champions, led by Aaron Finch would beat the men in blue to lift the trophy. The Australian team had secured the previous World Cup title by defeating New Zealand in the finals to lift the trophy at the Dubai International Stadium.

India might not have qualified in the knockout stage of the T20 World Cup 2021 in the UAE but Ricky Ponting has chosen India as one of the teams to reach the final in the upcoming T20 tournament. India had performed poorly under the captaincy of Virat Kohli and lost to Pakistan and New Zealand in the Super 12 matches before being eliminated from the tournament. However, the captain has changed now and is displaying an aggressive show under Rohit Sharma and has won several series against the West Indies, New Zealand, Ireland, Sri Lanka, and England. India is

What Ponting Has to Say!

Ponting has seen a lot of T20 cricket in recent times and he has also spent time as an assistant of team Australian under Justin Langer. He also got the opportunity to be the head coach of Delhi Capitals in the last 5 seasons of the IPL and commented on Big Bash League matches. Ponting has watched and analyzsed all the best players from around the world closely and personally and the captain who has won the World Cup two times agrees that some luck is required for winning an ICC trophy.

As per the trending cricket news, he said in the latest episode of The ICC Review that he thinks India and Australia would be the two finalists. Adding confidently he said that the Australian team would beat the Indian squad in the finals. Australia has the scope of playing in their home ground and that was one thing which led Australia to victory in the last World Cup, remarked the former Australian captain.

When the team went to the United Arab Emirates, the conditions that they were going to face might not have allowed them to get success, but they found a way around it.

When asked about who he feels is a threat to Australia and India in the tournament, he said that England has many match-winners. England would be playing under the leadership of Jos Butler. The wicket-keeper-batter did not get a good start to his stint as the retirement of the full-time captain Eoin Morgan, led to England’s defeat to India. Ponting is a fan of Brendon McCullum and the Kiwi has impressed him with how he has displayed his skills till now while playing for the England Test team. He feels that new England white-ball coach, Matthew Mott is given his great record with the women’s team of Australia. He thinks that England has an outstanding team and that they have an excellent white-ball set-up.

According to the world cricket news, Ponting also said that the fate of Pakistan would depend on their captain Babar Azam. He commented that if Babar cannot display his best form, Pakistan does not stand a chance to win. Adding further he said that he has observed him closely a couple of years ago in a Test series Pakistan played against Australia and he had remarked back then that the sky was the limit for Babar when considering the Test match batting and he has only got better in the past years. The openers are important for them and their new-ball bowlers are also paramount for them but the function of the spin bowler would be challenging for them with wickets that would not be of any help.

Ponting added that the three teams that are of the best class and have the most number of match winners are India, England and Australia.

Follow us for more information related to cricket news updates!