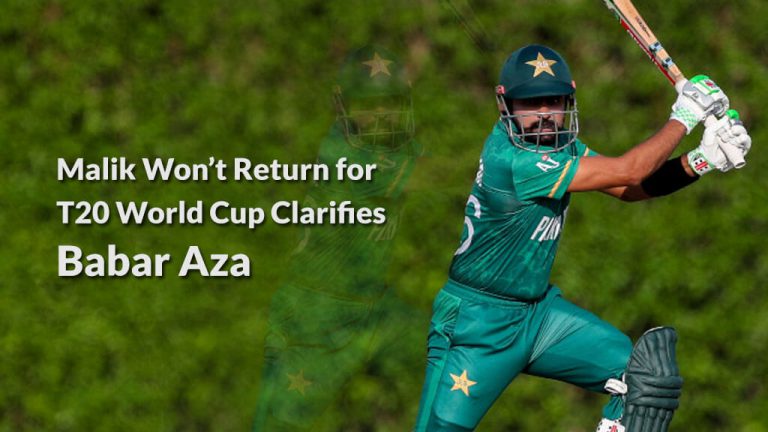 According to cricket updates, Babar Azam, has rejected the return of Shoaib Malik, the veteran all-rounder to the T20 squad prior to the commencement of the World Cup in Australia. He said that the team needs to give more opportunities to the young talents to hone their skills and develop and express themselves. Shoaib Malik would not be playing in the T20 World Cup.

Under the captaincy of Babar Azam, the national cricket team of Pakistan has been preparing for the ICC T20 World Cup 2022. The men in green have put up an excellent show in recent times even in important events. However, they could not advance to the finals of the T20 World Cup 2021 and lost to Australia. Before playing in the World Cup 2022, they would play in Asia Cup 2022 and the United Arab Emirates would host the competition.

What Babar Azam Has to Say:

As per the latest cricket news, Babar said to the reporters in Lahore prior to their Dutch tour that there are matches immediately after the Netherlands and thus, it is not likely that there would be time for alterations. When the senior players are not included in the team, the ones coming in to fill their position require focus. Mohammad Hafeez and Malik are great players and would be missed a lot but youngsters such as Khushdil Shah, Iftikhar Ahmed, and Asif Ali need to get their game strong. We want to offer them the chance to play a number of matches so that they can gain their confidence.

Babar is backing Hasan Ali to make his entry into international cricket after being dropped for the One-Day International series against the Netherlands and the T20 Asia Cup. Azam adds that he is aware of the fact that Hasan Ali is not in good form but he has nothing more to prove.

Malik, the former captain of the Pakistani team, is not selected in the team that will play in the Asia Cup this month. However, Shoaib Malik is continuing to play in the national team of Pakistan in the shortest format of the game. This is the T20 competition and the right handed batter has made his appearance for Pakistan in 124 T20 Internationals. He had a batting average of 31.2 and had scored 2435 runs in total. He was also responsible for 9 scores in the 50s.

Malik played the last T20I, out of his 124, against Bangladesh in November 2021. His performance has won hearts and had impressed many and the local media felt that with the Asia Cup and the World Cup approaching, the experience of the 40 year old can be put to good use. Along with the local media, some former Pakistani players also think that Shoaib Malik should be selected in the Pakistani cricket team for the World Cup later this year as per the latest cricket news.

However, to the dismay of cricket fans, there was no place for the former skipper, an invaluable and helpful resource, in the Pakistan squad for the Asia Cup which is about to begin from the 27th of August in the United Arab Emirates. Babar further commented that they were preparing for the future World Cup which is about to begin from October in Australia. Babar also mentioned before leaving for the tour of Netherlands that there would be no time to make alterations after the game at Netherlands.

According to cricket latest, Pakistan is going to play three One-Day Internationals in Rotterdam before they come to the United Arab Emirates for the Asia Cup campaign and their first match is against the arch rivals, India in the Dubai International Stadium. The next match between India and Pakistan would take place on October 23, 2022 when they would be competing in the Super 12 stage of the ICC World Cup. Follow us for more information regarding the latest cricket news!