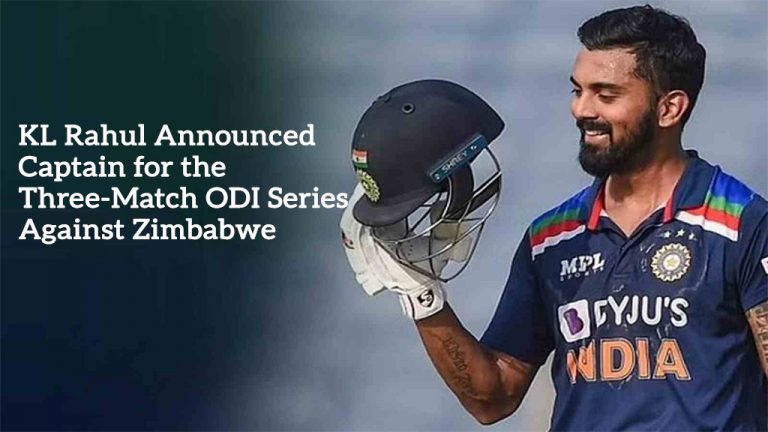 According to the latest cricket news today, KL Rahul who had been chosen as the Indian vice captain for the Asia Cup, is selected as the Indian Captain for the Zimbabwe tour. He had been out of action for quite some time with a sports hernia but with the green signal from the BCCI, is set to lead the Indian team for the 3-match ODI against Zimbabwe. Rahul had suffered an injury at home while practicing for the series against South Africa. Since February, when he had contracted the injury, while playing against South Africa, he had remained out of international cricket. Under the captaincy of KL Rahul, Lucknow Super Giants finished at the top 4 in the IPL.

Reason for Sitting Out of the Indian Squad

KL Rahul was rested due to his hamstring injury. The Indian opener had been through a successful sports hernia surgery after IPL 2022 but was unable to recover. He was supposed to be a part of the Caribbean tour but was not fit enough to undertake the journey and was advised by the BCCI to take rest after being diagnosed with Covid-19. After a long duration, the Indian opener is getting back in the squad and would be hoping to win hearts by donning the blue jersey once again and make India proud. He has also been selected to accompany the Indian contingent that is going to fly to the UAE for the Asia Cup late in August.

According to cricket updates, KL Rahul had stated that his surgery that took place in June was successful and he had begun to train for playing against the West Indies but unfortunately tested positive for Covid 19.

What BCCI Has to Say:

However, the BCCI medical team permitted the Karnataka batsman to return to the 3-match ODI series against Zimbabwe. The ODI series is scheduled to begin on 18th August, 2022. He has been assessed by the BCCI and has been cleared to accompany the Indian team in the upcoming tour of Zimbabwe. As per the cricket news the Board for Control of Cricket in India stated that the All-India Senior Selection Committee has chosen him as the captain and Shikhar Dhawan has been chosen as the vice captain.

The veteran opener, Shikhar Dhawan, would act as deputy. He had led the Indian players during the ODI series against the West Indies when the senior players had remained absent. The Indian players under the captaincy of Shikhar Dhawan had won against the Windies and he became the first captain to whitewash an ODI series held in the Caribbean. India had secured a 3-0 against West Indies last month under Dhawan. With most of the senior players sitting out, cricket fans had expected Dhawan, the senior most player, to lead the squad but the selectors chose KL Rahul which angered a lot of supporters.

Indian Players for the 3-Match ODI Against Zimbabwe

Players such as Rishabh Pant, Rohit Sharma, Jasprit Bumrah, Virat Kohli and Ravindra Jadega have been kept out of the Zimbabwe tour to give the youngsters such as Deepak Hooda and Rahul Tripathi to display their talent on the big platform. Rahul had played for India in February against the West Indies. He has also led the team in South Africa in the 2nd test match and the whole ODI leg.

Deepak Chahar also returns to the side. He had been ruled out before the IPL 2022 season commenced. He would probably partner with Prasidh Krishna and Avesh Khan for enhancing the attack. Washington Sundar and Kuldeep Yadav too returned to the ODI squad after they recovered from injuries.

The selectors have tactfully chosen a fairly young squad to take the tour of Zimbabwe and have rested most of the first-choice players as the Asia Cup 2022 is set to commence in a few days.