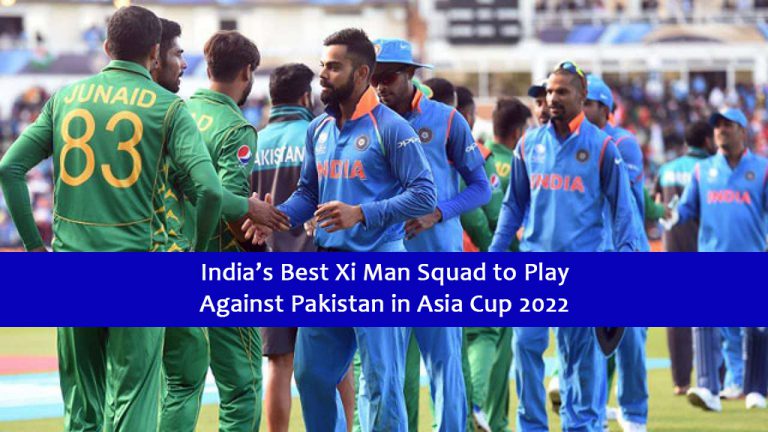 The vying cricket opponents, India and Pakistan are locking horns in the Asia Cup 2022 on August 28 in the United Arab Emirates. Everyday cricket news about the twists and turns in the previous performances between the two teams adds more spice and suspense that compel us to spectate the forthcoming mega-event. The social media banters result turning into verbal wars, debates everywhere about the winning team, and an invitation to the renowned cricketers to know their experiences.

Meanwhile, the playing XI squad of both teams are willing to surpass their defeats on the pitch. As India is beginning its cricket campaign with its first match against Pak, we could already hear the brouhaha among the cricket enthusiasts.

India had a disappointing 10-wicket defeat in the ICC T20 World Cup last year. To combat the lowdown, India is returning to the pitch with their best eleven-man squad for the Asia Cup 2022.

Let’s have a look at the predicted squad as per the latest cricket updates.

Rohit Sharma is an eminent name to contribute to team India’s victory. In the major cricket tournaments, Sharma has shown mixed performances against Pakistan. To emerge as a great player, Rohit has witnessed success and failures as well. He has also undergone multiple criticisms for not performing well enough.

His very first major impactful performance knocked on the success doors of International cricket when he blasted a 16-ball 30 against Pakistan in T20 World Cup in 2007. In the recent 3-match T20I series, the Indian batters showcased their cricketing brilliance under the captaincy of Sharma. Despite his big achievements, he is recognised as a slow-starter who tweaks the game gradually halfway through.

Possibly, the defeat in the last year’s World Cup would motivate him to pave new ways for success and block the early dismissal from the pitch. If this doesn’t happen, the playing squad may come under pressure. He is the hope of many eyes for the upcoming cricket matches.

Tracing back the performances of KL Rahul, he couldn’t impress many with his T20 gameplays. Over the last five seasons of the Indian Premier League (IPL), the fierce batter from Karnataka scored enough to leave the stadium stunned with his deliveries. KL Rahul owns undeniable potential that fetches his key position in the squad.

Due to his hamstring injury, he hadn’t been a part of the major cricket events since Feb. 2022. Reportedly, after undergoing the surgical treatment, he is coming back on the pitch to play in the Asia Cup 2022.

Rahul is a top-order batsman and his contribution to the team solidifies their performance. In the upcoming cricket matches, it would be intriguing to watch if he plays as a more free-flowing batter. At a stage of collapsing, KL Rahul brings stability to the team, making him one of the most experienced cricketers currently who gives multiple centuries in all formats. Be it any match in cricket, his essence in the team is irreplaceable to see more victories.

In the recent 3 years, Virat Kohli has not been in his form to show his real game. He batted for 33 runs in One Day Internationals (ODIs) against England which is not as impressive as his potential. His own flashbacks of brilliance have clamped him to the trollers’ criticism.

Despite delivering a low performance, the management and selectors can’t bring him down from the upcoming events, T20 Asia Cup and T20 World Cup in UAE and Australia respectively. We can’t forget his tremendous hits in Australia in 11 T20Is where he scored 451 runs at an average of 64.42, striking at around 145.

Though his score in the UAE looks not promising, he can turn the table anytime. Giving just 68 runs in 5 knocks, his performance was feeble at a strike rate of 100 also including a half-century in a match against Pakistan. The Asia Cup is a big opportunity for Kohli to reassure his fans to show some great batting and bowling figures.

Suryakumar Yadav can be an underestimated name but it’s no mistake in saying that Suryakumar Yadav holds major responsibilities for the team and will do so in the upcoming ventures as well. This 31-year-old cricketer or we say Mr. 360, brings some interesting and audacious stroke play consistently which is simply commendable.

Recently, Suryakumar Yadav hit his first century in the shortest cricket format against England. You could witness some great knocks that included the most stunning shots possible. To date, he has scored 537 runs in T20Is at a staggering rate of 177.23.

Against the arch-rivals, this Indian lad would pose some serious threat to bring the opponent to their toes with his best strategy. He is among those who settle for good when they have the best in them.

Rishabh Pant is an emerging star in the cricket world. Sometimes, he is unpredictable as he owns the capability of commanding a fixed spot across all three formats of cricket – Test matches, ODIs, and T20. From the time he comes to the pitch, we are assured that he will keep the momentum going, keeping his mind-boggling performance at its peak. He only operates either in black or white but not in grey.

Pant was an opener with Sharma in the T20I series against England. Clearly, it wasn’t a wise decision but he is the hero of his game when gets the right time and the opportunity. As he got the chance to be an opener, this indicates that the team believes him to be an in-form batter who can give a higher number of deliveries. In a do-or-die match against England, Rishabh scored his first century in the limited-overs.

Faltered by injuries and poor form, he could be a diminishing name but he re-emerged in international cricket. His capabilities started to come out with Gujarat Titans in the IPL. After that, he successfully scored 215 runs in 9 innings, taking 6 wickets in 5 innings.

Pandya is an all-rounder for the Indian squad and also has provided invaluable contributions in the ODI format, swinging the bat and the ball. Commanding over his rhythm, Hardik Pandya is a pivotal cricketer who takes the game to another level.

Meanwhile, the Pakistan cricket squad have proved strong skills but Pandya’s smart bowling antics can make a huge difference in the team. With his amazing performances, he is getting significant recognition. To that, it would be an interesting turn if could live up to the expectations of his fans or not in future matches.

The duo of Ravindra Jadeja and Hardik Pandya is a lethal combination of bowlers in the XI-man squad that allows more depth in the team. Coming on the field together can be a great step for team India’s win against countries like Australia. In the ODI series against England, the duo performed quite well which has increased their importance in future tournaments.

Jadeja is a finger spinner that led Pakistani batters to hit more, so it would be interesting to watch Jadeja bringing a difference with his bowling skills. Ravindra Jadeja adds remarkable glory when he comes as a low-order batsman.

If Jadeja and Pandya bowl in the 5th and 6th spots, it backs the bowlers ahead of them to tackle the situation on the ground. He could churn out some great performances in the Asia Cup 2022.

Avesh Khan is a great pacer in the Indian squad. In the recent ODI series, Avesh picked 3 wickets in 4 matches against West Indies while he picked 1 wicket in 1 game against England.

Khan has the ability to keep the ball moving consistently and he can add some extra bounce-off length with his pacing potential. In the upcoming cricket matches, he could be a crucial addition.

Before the IPL season, the fast pacer in the Indian squad, Bhuvneshwar Kumar could be out of contention. In the recent matches, Kumar gave a terrific performance with the Sunrisers Hyderabad. With an economy rate of just 6.07, he took 6 wickets in the T20I series facing South Africa. He also scalped 6 wickets on his trip to England and Ireland.

Kumar is good in economic power play overs that are reminiscent of the blissful days in cricket when he used to swing the ball unpredictably. Offering crucial breakthroughs in the matches, Kumar is an emerging bowler in the cricket world.

In 2012, Kumar debuted against Pakistan. Covering the 10 years journey of cricket, Kumar has gone through thick and thin but it didn’t shatter his confidence and courage to go ahead. For a couple of years, he wasn’t regular but he is back on track from the recent matches.

In IPL 2022, Yuzvendra Chahal successfully picked up the Purple Cap for Rajasthan Royals. His efficiency and pace of playing were quite promising and could be revitalizing for team India as well.

His leg-spinning techniques have constantly knocked the opponents and he is expected to come with more variations to his arsenal. If it comes true, he would be a terrific performer.

Yuzi wasn’t a part of the T20 World Cup lately as the figures were backing him enough to be included in the team but he stands tough in the fixtures against Pakistan. UAE has a slower pitch and Chahal’s lack of pace can favour him in the upcoming tournaments.

Against England in the T20 series, Chahal took 4 wickets and he performed quite well in ODI as well, taking 7 wickets in 3 matches.

If Jasprit wasn’t ruled out due to his injury, Arshdeep Singh couldn’t get an opportunity to offer his contribution to the team. Consequently, Arshdeep Singh will get a go in the upcoming cricket tournament instead of the leader of the bowling attack, Bumrah. Seemingly, many eyes will be on him to see how he performs or if he is a good pick for the squad.

Arsh is a left-arm pacer who made a blistering start to his international career and has a long way to go in his cricket career. From swinging the balls to nailing the yorkers at the death, Arsh has the zest and all the skills within. Additionally, his uniqueness of left-arm pacing for the bowling attack can put the opponents in a dilemma, giving away their wickets.

So far, Arsh has rattled the stump, taking 9 wickets in 6 games at an economy rate of 6.34. Despite being young and talented, this 23-year-old pacer hadn’t wobbled in his international cricket career as well. The UAE tracks are considered to be more on the slower side and this would be a really hard face-off for Babar Azam to stand tough against him. It is expected that he would be submissive in his role and would surely help the team to lift the Asia Cup.

If you are also eyeing the latest cricket updates or cricket news, stay connected with CBTF Speed News!

Also Read : Virat Kohli Has the Tools to Come Out of It (Slump)’: Mahela Jayawardene on India’s Asia Cup Campaign