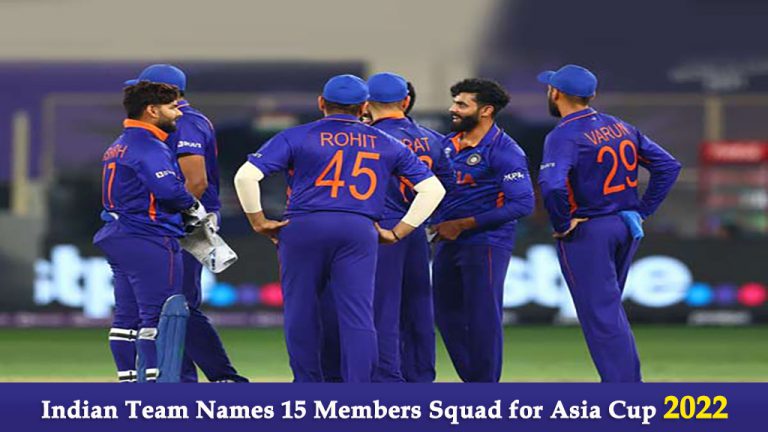 The BCCI has announced the 15-member India squad for the forthcoming Asia Cup 2022. Former India captain Virat Kohli and current T20 vice-captain KL Rahul are back in the lineup. Rahul contracted Covid-19 at NCA as Rahul was recovering from a sports hernia operation, while Kohli requested respite due to his substandard performance. Arshdeep Singh is India’s third seamer, and Rohit Sharma has been selected as captain. Additionally, Deepak Hooda cut, making him India’s third backup bowler.

Speculation about Kohli’s position in the team was rampant following his non-selection for the West Indies tour. Still, the former captain has been re-inducted into the 15-man squad for the continental competition. On the other hand, KL Rahul has rejoined the team after missing the England and West Indies tours due to sports hernia surgery and COVID-19. Keep reading to get the latest & top cricket news detailed information.

On August 27 in Dubai, the 6-team Asia Cup will get started. A day later, India will face Pakistan in the campaign opening at the Dubai International Stadium. Group A includes Rohit’s squad, Pakistan, and a different qualifier team, the identity of which will be announced by August 26. India’s preparation for the crucial 2022 T20 World Cup, which starts in Australia on October 16, will have a tremendous golden opportunity thanks to the Asia Cup. KL Rahul, who underwent surgery for sports hernia and missed the England tour and the tour of West Indies due to Covid-19, is back in the squad.

India may also play six T20Is at home after the Asia Cup. Three against South Africa and three against Australia. Shikhar Dhawan will represent India’s captain for their next three-match ODI series against Zimbabwe in the meanwhile.

Meanwhile, India was dealt a severe setback when Jasprit Bumrah’s back injury prohibited him from competing in the Asia Cup. The team for the major competition on the continent did not include Mohammed Shami.

In the shortest format of the game, Deepak Hooda and Suryakumar Yadav have been awarded for their steady performances. Arshdeep Singh, a left-arm pacer, and Ravi Bishnoi, a leg spinner, have both earned recognition for their dependable efforts in white-ball cricket, particularly in the IPL.

Get the latest cricket news, and cricket live Scores here!