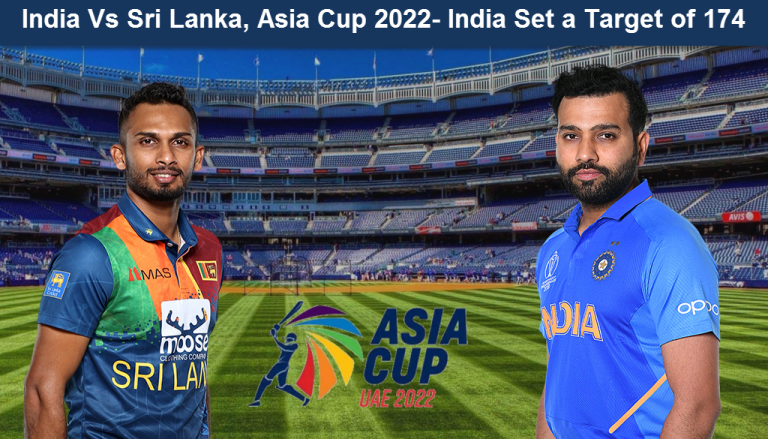 Summary – India set a target of 174 for Sri Lanka. Initially, they were not in their form, but at the end of the inning, they played well and scored 173/8 against Sri Lanka in India Vs Sri Lanka Asia Cup, Super 4.

Dasun Shanaka, the captain of Sri Lanka, elected to bowl first after winning the toss in Dubai. According to Shanaka, his choice was based on the venue’s historical performance when teams vied for victories. The captain of India, Rohit Sharma, concurred with his opponent and said that he too would have bowled first. Sri Lanka remains the same, while India adjusted their strategy by substituting Ravichandran Ashwin with Ravi Bishnoi.

Despite bowling two wides, Dilshan Madhushanka otherwise made all six of his legal deliveries on target. His first pitch swung, and KL Rahul was fortunate to score a single as the outside edge raced away safely into the point area. The left-arm pacer’s opening over only yielded four runs.

Sri Lanka’s team is off to an excellent start. KL Rahul, the team’s opener, and the in-form Virat Kohli were quickly dropped. While Kohli failed to open his account, Rahul fell on the sixth.

However, Rohit Sharma and Surya Kumar Yadav turned into a winning duo. They played well and turned the inning towards a positive change. Today, Rohit Sharma appeared to be quite fluent. He achieved his fifty-first run off only 32 deliveries. Suryakumar Yadav and Rohit Sharma had some excellent hitting.

Rohit Sharma got a catch out in the 12th over. He scored 72 off 41, including five fours and four sixes. After Rohit, Sri Lanka’s captain and the bowler, has dislodged the well-set Suryakumar Yadav on 34. Rishabh Pant will be eager to atone for his lacklustre performance against Pakistan. He struck a four that was muscled to midwicket with excellent timing to start his innings. The over was then concluded with a fourth point that was crashed through.

Dasun Shanaka tested Hardik Pandya with a slower one and got success. Pandya attempted a powerful smash, but this time he was caught by the fielder at midwicket, leaving him out at 17.

Madhushanka had taken two wickets in a single over of Deepak Hooda on the first ball and Rishab Pant on the last bowl. Rishab Pant scored 17 runs, while Deepak Hooda scored only 4 runs. At the end of the first inning, India scored 173/8 in India vs Sri Lanka in Asia Cup.

To get updated with the second inning stay tuned with CBTF Speed News.