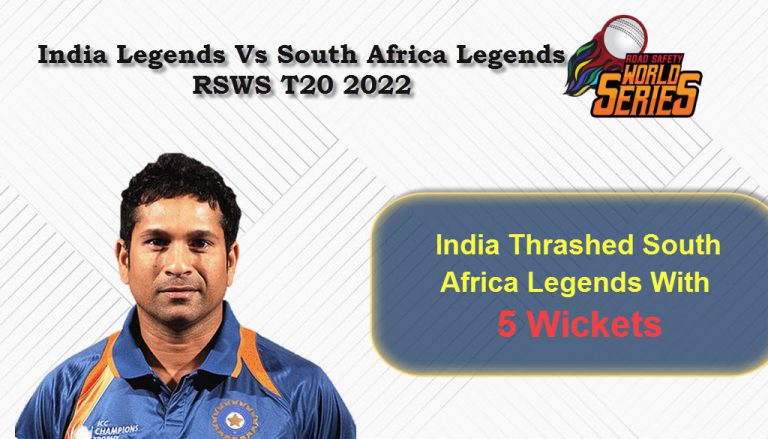 Summary – India credited the first win in their account against South Africa Legends during the first match of RSWS T20 2022 by smacking out all the wickets in 20 overs.

The Green Park in Kanpur, where India Legends vs. South Africa Legends is being contested, has historically benefited the spinners. As a result, the pitch acts similarly. 80 percent of the time on this field, the team batting second has won.

India Legends opted for bat first after winning the toss, and Naman Ojha and Tendulkar were at the crease. Tendulkar is gone for 16, and Ntini picks up his wicket. The master has to walk back after a blistering start peppered by his trademark shots. Van der Wath bowled Naman Ojha and scalped his wicket, caught by Jonty Rhodes. Ojha finished his inning with 21 runs. Brilliant batting by Raina and Binny brings up the 100 for India. They are turning back the clock and showing us what cricket is missing nowadays.

However, South Africa Legends get a big breakthrough as Suresh Raina hits one high, and that has just looped down with a curve and found the fielder near the boundary. Suresh Raina successfully hit 33 (22) from his bat in this tournament.

Yuvraj Singh played his inning and was caught out after hitting just 6 runs. The fans got a little disappointed after Yuvi’s innings ended prematurely. It was a good performance by Binny, who racked up a half-century to his credit in 31 balls. The duo of Yusuf and Binny made it and set up a score of 217/4. South Africa Legends needed 218 runs to turn this tournament on their side.

No matter who won the game, it was fun for the fans to look at the legends, such as Sachin Tendulkar, Yuvraj Singh, Rahul Sharma, Suresh Raina, and many more, playing again on the ground in Road Safety World Series T20 2022, India Legends Vs South Africa Legends.