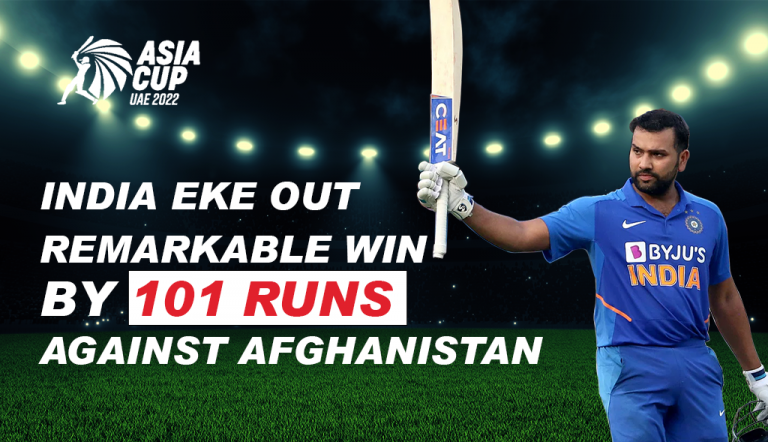 Before the commencement of the match, the head coach of Indian team, Rahul Dravid stated, ‘Just because we have lost a couple of games, it doesn’t mean we are a terrible team. I think we don’t need to overreact with things.’

Starting the innings on the ground, the lethal duo of Rahul and Kohli showed real power of team India with a couple of good shots and wonderful ball hits off the fence. Rahul whacked the opponent bowler Mohammed Nabi for consistent fours in a go, completing his half-century in just 37 balls.

With a commendable form, Rahul departed the pitch at 62 off 41 deliveries against Fareed Ahmad. Consequently, Suryakumar Yadav joined Kohli and soon dragged the ball onto the stumps after hitting a six, holding India at 125/2 after 13 overs.

Kohli was in scintillating form and remained unbeaten on 122 off 61 balls. Kohli amassed massive runs for team India in the final bowling overs of Fazalhaq Farooqi that recorded Virat’s 71st century.

For the run chase of India’s score, Afghan batters Rahmanullah Gurbaz and Hazratullah Zazai laid their hands on the bat to face the initial bowling attack of Bhuvneshwar Kumar. Giving off a single run, Kumar trapped Hazratullah Zazai in the first over. The next strike by Bhuvi dismissed Rahmanullah Gurbaz in the same over, letting them take one single.

Kumar scalped the third wicket of Karim Janat, compelling him to leave 2(4) with Afghan at 9/3 in 2.4 overs. Bhuvi spared none and bagged his fourth wicket of the match against Najibullah, trapping him for LPW.

Axar Patel bowled a wonderful win to give off just three runs to Afghan players in his first over, leaving AFG at 29/6 in 9 overs.

Till the time Deepak Hooda delivered his first strike, Afghan stood at 63/7 in 15 overs. Mujeeb showed a smart reverse against Ashwin and hit four runs and Afghan jumped to 73/7 after 16 overs.

In the last over against Zadran from AFG, Dinesh Karthik rolled out his arms and restricted them at 111/8, making a remarkable victory.

We, at CBTF Speed News, bring the latest cricket news and cricket updates for all the cricket tournaments. For more updates, stay tuned!