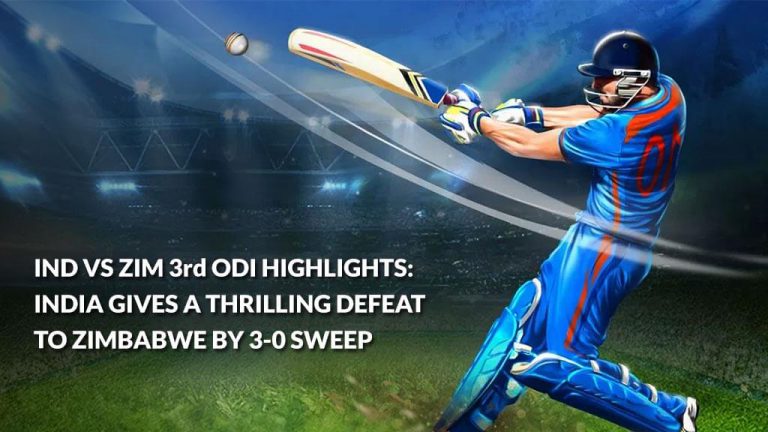 Sikandar Raza endeavored to break off the consistent winning streaks of India and their first ever ODI win in 12 years. Chasing for a masterful century, Raza persevered to win but fell short against India by 13 runs.

During the jaw-dropping match of the series, Shubham Gill hit 15 fours and one sixer in 97 balls 130. Consequently, Gill’s batting power set a record for the highest Indian individual scorer in ODI in Zimbabwe.

The fierce players of the Indian squad knocked out the key wicket, assuring their marvelous win of the bilateral series in the 2022 Zimbabwe series.

Kuldeep Yadav showed a furious bowling spin to Raza, which Raza survived on 23 off 31. It followed a strike of the sixer and a four off Deepak Chahar, coming into the picture to pace up the game when Zimbabwe was lowering down under the pressure of regular wickets.

The veteran middle-order batter, Raza kept his game up after hitting the half-century and struck 3 fours in the overs delivered by Shardul Thakur, yielding 20.

Adding some zest and fun, Gill grabbed the limelight in the initial innings, who walked into the pitch after the dismissal of Rahul and Dhawan, putting 63 for the opening wickets.

However, the young lad continued to bat with his excellent gameplay and contributed to the Indian squad to progress enough. He ensured to hit regular boundaries and enticed the spectators with exquisite drives, vigorous sweeps and cuts. Reaching 50 off 51 hits, Gill cantered to cross 100 off 81 deliveries.

Here are some wonderful statements that came up from the key players of both squads:

KL Rahul stated, ‘Feels good, we came here with good ideas. We wanted to be out in the middle and use this time. They have been very professional, and very happy with the result. They took the game deep, we would have liked to finish the game earlier. The bowers were tested and they held their nerves. Fielded about 120 overs, and got some time out in the middle with the bat. I am tired of coming back after a couple of months. But this is what we all want to do, playing for India. (On Gill) He’s been batting well since the IPL. Very pleasing to the eye. Not seen as over-confident. That requires composure, to show that kind of temperament is good.’

Shubham Gill’s side, ‘I was just trying to minimize my dot ball percentage. I tried to hit the gaps as much as possible. When I went in, there were a couple of bowlers bowling well. It was crucial to get through that. Once we were settled, we knew we could attack. The bat was pretty good. That’s why I changed it after my 50, I wanted to save it. Definitely special (on hitting his maiden international ton). (Playing in this team) It feels great, a great bunch of players. Feels good when you are with the same bunch. My father has been my primary coach. I got schooling after I got out in the second ODI, so I dedicate this to him.

Despite the woeful defeat, Regis Chakbva gestured, ‘Firstly congratulations to India. They played really well. Raza and Brad gave a good fight, but India held their nerves. Huge positives from the bowling. The boys fought hard in the field. We came back strongly from a tough situation. Raza was outstanding once again. We definitely take a lot of positives from today, we’ll look to play some good cricket Down Under.’

Also Read : IND VS ZIM: 2nd ODI HIGHLIGHTS WITH BOWLERS BEING THE SAVIOUR