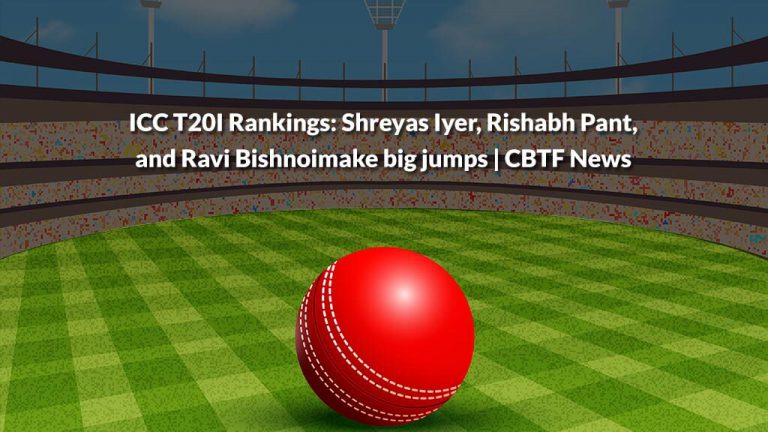 After a great performance against the West Indies, Indian players like Shreyas Iyer, Rishabh Pant, and Ravi Bishnoi were promoted in their ranks in the most recent ICC T20I rankings on Wednesday, August 10, 2022.

In the just concluded T20I series against the West Indies, India easily won 4-1 overall, and many of their top players reduced Babar’s lead atop the batter rankings. Suryakumar Yadav, the only other Indian in the top 10, maintained his second-place ranking with 805 rating points.

As the ICC T20 World Cup in Australia, later this year approaches, the competition for the top ranking has increased. Shreyas Iyer and Rishabh Pant were among the biggest risers.

Iyer smacked a strong 50 during the fifth and final game of the series in Florida, and as a result, he moved up six spots to the 19th spot on the batter rankings. With 115 runs, Pant concluded the series as the series’ second-highest run-scorer, and his quick-fire 44 in the fourth game propelled him up the rankings to number 59.

In the ICC T20I rankings, the Indian bowlers also saw great success in addition to the batters. With eight wickets, including 4/16 in the last game, young spinner Ravi Bishnoi led India in series wicket-taking, moving him up to 44th overall.

The experienced Bhuvneshwar Kumar fell one rank to ninth after just three wickets during the West Indies series due to his absence from the fifth and final T20I. Still, teammates Avesh Khan, Axar Patel, and Kuldeep Yadav made significant gains as well.

In the ODI rankings, Sikandar Raza of Zimbabwe jumped 10 ranks to 29th place among batters and an astonishing seven slots to fourth place among all-rounders as a result of his two straight centuries in Zimbabwe’s series victory against Bangladesh.

Iyer secured a spot in the 2014 Under-19 World Cup by decimating bowling attacks during his college career. Iyer was recruited to play for the Trent Bridge cricket squad in England after a disappointing showing on the somewhat slow surfaces. Iyer took full advantage of the opportunity when the ball came onto the bat and quickly rose to prominence, scoring 297 runs in three innings at a 99-like average, much like Bradman.

The experience at Trent Bridge gave his confidence the spark needed to continue and perform outstanding performances in the ensuing domestic competitions. In the Ranji Trophy and Vijay Hazare Trophy that followed, he averaged over 50, making a remarkable 809 runs at 50.56 in his first Ranji season. His run totals in the succeeding Ranji seasons bordered on the absurd; in the 2015–16 season, he collected 1321 runs, including 7 fifties, 4 hundred, and an unheard-of average of 73.39.

A rise to fame through X-factor

As per cricket updates, He instantly attracted comparisons to the renowned Indian batsman Virender Sehwag for his bold and dominant stroke-play and, more notably, his hand-eye coordination, even against abrupt lateral movement, as his strike rate was even more striking.

Iyer uses a standard stroke-player approach, focusing on early line and length detection and playing through the ball’s line. Too many shoots for the same ball and early commitment to the ball’s line are the trade-offs of this tactic. Iyer had a few shaky innings in the 2017–18 Ranji Trophy because the ball tended to zip about off the seam and because he was out to strokes that belonged on actual wickets and was defeated and dismissed on surfaces that were conducive to bowling. However, he has plenty of time to work on his shortcomings and patch up his armor in the foreseeable future because age is on his side.

What the future holds for those who play international cricket?

Iyer was chosen for the Test squad to take the place of an ailing Virat Kohli after reaching 202 off 210 balls against Australia in a warm-up game before the home series against them in early 2017. The national selectors could no longer ignore Iyer. Despite not being given a Test cap, he was given a place in the limited-overs XI in late 2017. Given the figures and his aggressive stroke-play, he appears to have the potential to become a future superstar in Indian cricket. Yet, his opportunities in these games don’t provide a sizable enough sample space to appraise his talent.

Shreyas Iyer, known as the most sought-after uncapped player in the IPL, earned the distinction of being the highest-earning uncapped player of the 2015 auction after receiving a stunning 2.6 Crores from a base price of 10 Lakhs. Iyer was brought to Delhi by Pravin Amre, the Delhi Daredevils assistant coach. Iyer did not disappoint his childhood coach. After amassing 439 runs during the competition, winning the developing player award, displaying his aggressive style of play, and pleading with the selectors for an India call-up, he became the talk of the town.

For more cricket news stay tuned and follow us!