CBTF SPEED News
View All News
Home India Team News “I was expecting answers to my questions after the retirement of Sachin…..” Karthik on Rohit’s delayed rise in Tests 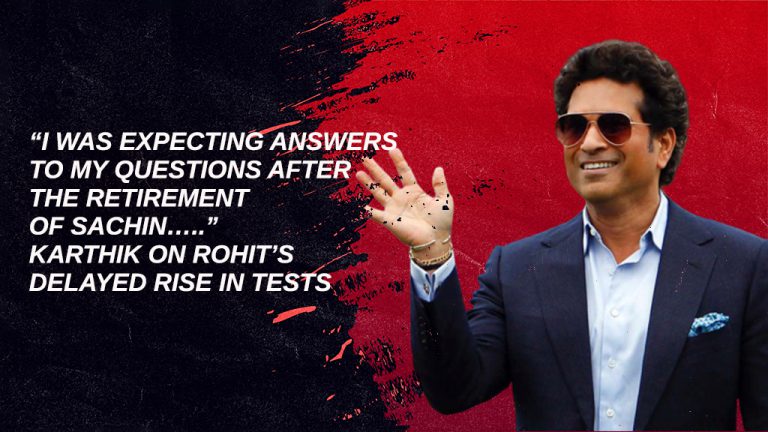 In this recent interview, Veteran Indian Wicketkeeper and Batsman Dinesh Karthik conveyed the disappointment faced in the first half of his test career.

In November 2013, the god of cricket Sachin Tendulkar was playing his last ever International bilateral match which was a test series of two days against the West Indies at his home ground. It was the final farewell of Sachin Tendulkar from all forms of cricket so, everything else has dwarfed in front of that event. It was one of the great cricket news stories of the decade. At that time people forgot that the team consisted of 11 players and whatever mattered for them was only one player. It was a heart-wrenching situation for the fans as a 24 yrs long career of their god was just about to end, this has put all of his fans on an emotional roller coaster. It was the show time and the Eden Gardens and Wankhede Stadium of Kolkata and Mumbai respectively were chosen for the final showtime.

Before the game started people were waiting for the latest cricket updates on Sachin’s performance. In the first match, Sachin played a short inning of 10 runs and was dismissed during the initial over of the match in the Kolkata pitch and scored 74 runs in the final outing for India. In the same match Cheteshwar Pujara beautifully crafted a century but whatever gets the priority was 74 runs that were scored by Sachin Tendulkar. People only talked about 74 runs neglecting the century. Unable to follow a giant target West Indies lost the match against India. The series was over with the final farewell to Sachin Tendulkar.

Many people noticed that if that match was the end of the era of Sachin Tendulkar, the same series was also marked as the career launcher for the other highly talented Indian batsman. On the pitch of Kolkata, Rohit Sharma made a remarkable score of 177 runs in his first test debut, which makes him the 14th Indian batsman to score a century in this maiden test. He again hit a century in Mumbai and was not out at a score of 111 which makes this test series the best starting of his career. Even after having such a great achievement, all news channels were showing Sachin Tendulkar’s farewell as the latest cricket update rather than the century of Rohit Sharma.

Coincidentally, the test career of Rohit Sharma fell flat from that day onwards. Indian team’s middle-order batsmen Pujara, Virat Kohli, and Ajinkya Rahane, Rohit Sharma struggled to fix their position in India’s 11. Veteran wicketkeeper of Indian team Dinesh Karthik told how this amazing batsman dealt with the disappointment in the first half of his test career.

“I don’t think there have been many who’ve had a start as successful as Rohit in Test cricket from an Indian point of view. In his first two matches, he got hundreds… and then everybody thought this is it – he is the big deal and the fact that Sachin is retiring from Test cricket, he is the one who is going to answer all those questions for us. But life and sport as it turns out is never exactly what you think it is and there were a lot of curve balls thrown at Rohit over the period,” Karthik said

While Rohit Sharma would have to wait for this chance in test cricket, he has significantly grown his presence over the limited overs cricket. He is the only batsman to score three double centuries in the ODI match and banged four centuries in T20 cricket. This cricket news has made an impact on the fanbase of Rohit Sharma and his white-ball career has reached new heights but he failed to make his presence over test cricket.

Also Read : Virat Kohli Has the Tools to Come Out of It (Slump)