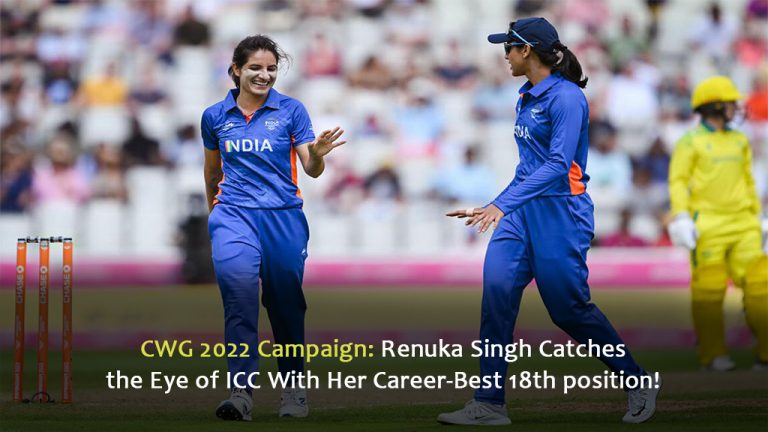 Renuka Singh, who won the most wickets at the Commonwealth Games 2022, has skyrocketed to the 18th position in the ICC Women’s T20I Rankings for bowlers.

Indian pacer Renuka Singh, who finished with the most wickets at the Commonwealth Games 2022, has rocketed to position 18 in the ICC Women’s T20I Rankings for bowlers. Renuka has made her first top 20 appearance thanks to her 11 wickets. After this performance, she rose ten ranks in the rankings. Additionally, after being displaced by her captain Meg Lanning just a few weeks ago, Australian opening batswoman Beth Mooney has regained the top spot for batters in the ICC Women’s T20I Player Rankings.

After a 41-ball 61 against India in the gold medal game, Mooney wrapped the Commonwealth Games on a high note, leading the competition in runs scored 179. She has participated in 14 games and her batting average is 93.75 while her bowling average is 13.66, which places her for the first time among the top five and in 12th place among all-rounders.

Tahlia McGrath, Mooney’s teammate, has continued to soar. She has played in 14 games and has a batting average of 93.75 and a bowling average of 13.66, putting her in the top five for the first time and 12th place among all-rounders.

By scoring 146 runs in Birmingham, Jemimah Rodrigues displayed some form.

This helped her move up seven ranks and reenter the top 10 batters for the first time since October 2021.

England’s bowlers currently occupy the top three spots in the bowling rankings despite not taking home a medal. Left-arm spinner Sophie Ecclestone is still in the lead with a healthy margin of 34 rating points over Brunt.

In contrast, Ashleigh Gardner from Australia moved up to position 22, and Nadine de Klerk from South Africa moved up to position 28.As per latest cricket news, With five wickets at an economy rate of 4.20 and 96 runs at a strike rate of 137.14, Gardner is now the second-best all-rounder in the world, only behind Sophie Devine, who led New Zealand to the bronze medal.

How Renuka Singh got into cricket?

Renuka Singh Thakur was born in Shimla, Himachal Pradesh, on February 1st, 1996. She displays a tattoo of a parent and daughter playing on her bowed arm. In honour of her late father, Kehar Singh Thakur, who passed away in 1999, she inked it. He previously worked at Rohru’s irrigation and public health departments for Himachal Pradesh. Her father’s dream is reflected in her achievements on the cricket field.

In 2000, Sunita, Renuka’s mother, was expected to join her husband’s workplace as a Class IV employee when her children started playing cricket. When they participated in village tournaments, Renuka occasionally appeared in both the morning and evening matches as the sole girl. Vinod had to stop playing cricket since Sunita could not pay the costs for two.

Renuka’s career took off after she enrolled in the residential girls’ academy run by the Himachal Pradesh Cricket Association in 2009. She was naturally athletic because she was from a hilly area, and the academy coaches made her run cross-country to increase her stamina.

During her time at the academy, Renuka improved her line and length control and tempo. She mastered not only the in-swing and yorkers but also the leg-cutter.

Renuka Singh recorded a hat-trick in a U-19 encounter against Karnataka in 2016. In 2019, Renuka Singh finished first in the BCCI Women’s One-Day competition with 23 wickets.

The Railways offered Renuka Singh a position. In the Senior One Day Trophy, where she quickly advanced in her career, she took nine wickets in five games, which helped her earn her T20I debut in Australia in 2021.

While touring New Zealand in February 2020, the aspiring pacer had the opportunity to learn from the seasoned pacer Jhulan Goswami. Renuka Singh was chosen for the 2022 ODI World Cup, but she did not play.

Later on in the year, while attending the two 10-day camps on either side of the Sri Lanka series to get ready for the Commonwealth Games, Renuka hardened. A dedicated trainer led group coaching sessions for fast bowlers. At the camp, the bowling speed and spells were observed. Every calorie was counted by the doctor while adhering to a chart. Renuka was able to understand her game better thanks to the video analysis of each session. In the first two games of the tour of Sri Lanka, the seamer demonstrated her value by taking seven wickets (at 3/29 and 4/28) to help India win the ODI series.c Follow us for more information regarding cricket updates!