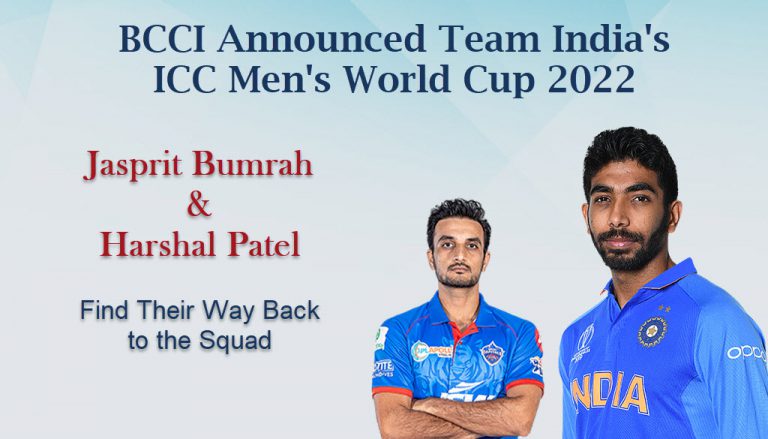 As per the cricket news, the national selectors of the Board of Control for Cricket in India (BCCI) met on Monday, 12th September, virtually for a meeting to decide the final squad for the T20 World Cup 2022 which is to be held in Australia. The limited overs series against South Africa and Australia squad is also decided. The selectors need to make some tough choices as India’s performance in the Asia Cup 2022 was not up to the mark. India failed to make it to the final as they lost back-to-back Super 4 matches against Sri Lanka and Pakistan.

The national selectors are accompanied by coach Rahul Dravid and Indian captain Rohit Sharma. With fast bowlers Harshal Patel and Jasprit Bumrah still recovering from injuries, it would be thrilling to see if their position in the squad would be considered for the T20 World Cup 2022 that is about to begin the following month.

Another point of question arises with the position of Rishabh Pant in the team, who did not perform well in the Asia Cup 2022, whereas Dinesh Kartik had only a few opportunities to display his talent in the UAE. It is also essential to find out which players would be selected as the spin bowlers for India while considering the fact that the tournament would be played in Australia.
The selectors are most likely to rest players for the ODI series against South Africa who would be selected for the T20 World Cup for sure.

The national senior selection committee sat on Monday to decide the Indian squad for the upcoming T20 World Cup in Australia.

According to the latest cricketing news, the standby players are as follows:
· Mohd. Shami,
· Ravi Bishnoi,
· Shreyas Iyer,
· Deepak Chahar.
Rohit Sharma, the Indian skipper, now has his eyes fixed on the title of the T20 Men’s World Cup as hardly a week is left for the preliminary 15 to be selected. All eyes are now fixated on the selected players in the hope of winning the T20 World Cup. For more information related to World Cricket News, follow CBTF Speed News