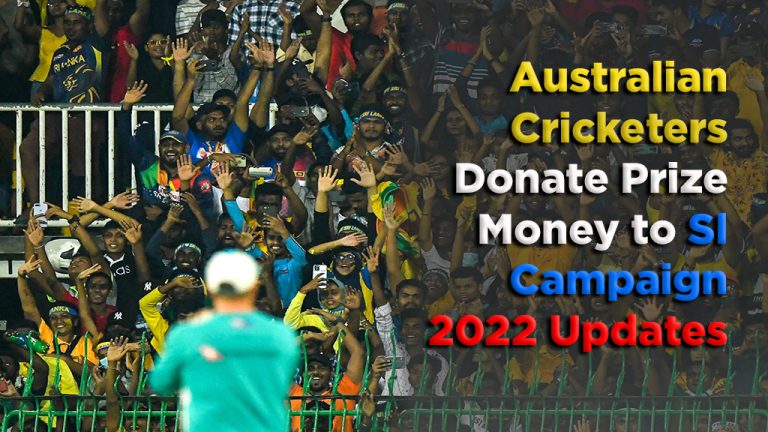 Australia’s men’s cricket team has donated their prize money from the most recent tour of Sri Lanka to help families and children impacted by the country’s biggest economic crisis in decades. The team will contribute $45,000 to UNICEF Australia’s Sri Lanka campaign under the direction of captains Pat Cummins and Aaron Finch. Cummins is a UNICEF Australia ambassador.

Thousands of peaceful protesters’ cries echoed around the Galle International Cricket Ground on day two of the second Test, and similar demonstrations in Colombo’s capital forced the resignation of the nation’s president and prime minister. Australia’s cricketers experienced the crisis firsthand during their all-format tour in June and July this year.

Food prices have increased by 80% due to the island nation’s dire economic circumstances, and more than two-thirds of households have cut back on their food consumption.

Three days a week are set aside for school since there isn’t enough fuel for both teachers and children to commute, there are often lines for food and medicine, getting to the doctor is getting harder, and there isn’t enough clean water to go around.

According to Cummins, “The impact of the conflict on Sri Lankans’ day-to-day life was evident to us.“

When the team heard what was going on, it was an obvious decision to donate our award money to UNICEF, which has supported children’s and families’ needs in Sri Lanka for over 50 years.

Finch expressed gratitude to the Sri Lankan people for their gracious hospitality during the white-ball leg and hoped the trip “helped raise their morale in some little way.”

It’s not the first time the Australian team has been moved by things other than cricket while on tour; in 2021, the COVID-19 issue in India led to the postponement of the Indian Premier League, Cummins, and Cricket Australia both donated $50,000 for oxygen supply.

Tony Stuart, CEO of UNICEF Australia, stated that Australian cricketers had supported India last year during the height of the COVID-19 Delta wave. “We appreciate them for again giving generously to help Sri Lankans impacted by the present disaster,” Stuart added.

Australia and Sri Lanka have a close connection that extends beyond game days, and we are grateful for your donation to help ensure the long-term welfare of Sri Lankan families.

Australia’s first trip to Sri Lanka since 2016 saw the visitors take the T20 series 2-1, the hosts taking the ODI series 3-2, and the two-Test series in Galle ending level at 1-1.

The new president of Sri Lanka will be Ranil Wickremesinghe, a six-term prime minister.

Massive protests in March in reaction to a lack of food, fuel, medicines, and other necessities shook Sri Lanka.

According to the experts, the crisis has significantly impacted human rights. Long-term disruptions in access to food and healthcare have harmed those who are ill, pregnant women, and breastfeeding mothers who are in critical need of life support.

Attiya Waris, a UN independent expert on foreign debt and human rights, stated that “time and time again, we have witnessed the catastrophic systemic implications a debt crisis has had on countries, exposing major structural flaws of the global financial system, and undermining the execution of human rights.”

In April, thousands of people gathered in front of the President’s office to demand his resignation for corruption and the poor handling of the economic crisis. UN experts encouraged the government to protect the fundamental rights of peaceful assembly and expression during these rallies. At least seven people were killed in the violence that broke out across the country, according to UN human rights chief Michelle Bachelet.

Sri Lanka defaulted on a $51 billion foreign debt in May as its foreign reserves ran out. The International Monetary Fund (IMF) helped the government restructure the debt and remarked in June that significant progress had been made.

Ms. Waris stated that “human rights should be the cornerstone of any response to the economic crisis, especially in negotiations with the IMF”.

In a study published after an expert visit in 2019, the topic of Sri Lanka’s increasing institutional debt has been raised.

The report discovered that paying off debt accounted for most of the nation’s expenses and emphasized the need for complementing options and pursuing less destructive policies. This month, inflation reached a record high of 54.6%, while food inflation increased to 81%.

The government’s rushed and disastrous agricultural shift, according to the experts, hastened the “snowballing economic and debt catastrophe,” and the World Food Programme (WFP) has started an emergency reaction as approximately 62,000 people need immediate help. The UN Human Rights Council, which has its headquarters in Geneva, gave the statement’s experts their instructions. They labor independently and are neither employed by the UN nor receiving compensation for their efforts.

For the latest cricket updates or cricket buzz follow us!