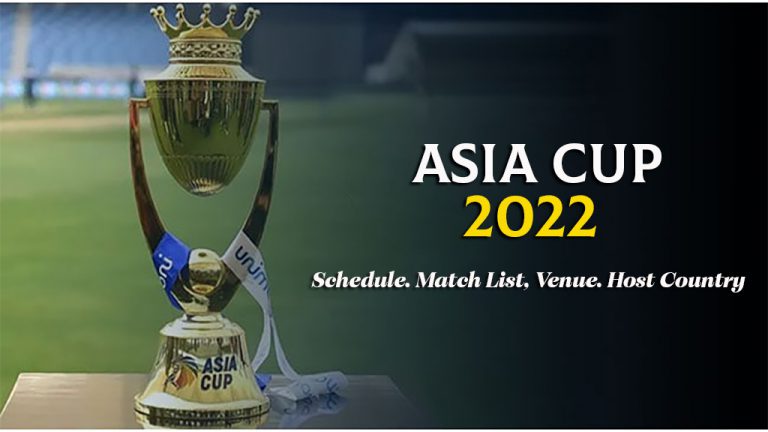 Asia Cup 2022 is the next biggest upcoming cricket event that is driving the fans crazy. The Cricket world is anticipating the outcome of megaevent, which is set to commence on August 27 and end on September 11. Seemingly, six teams will be squaring off in the forthcoming Asia Cup event. The teams include India, Pakistan, Sri Lanka, Bangladesh, and Afghanistan, and the qualifier of the last match will be the 6th team of Asia Cup news 2022.

The 2018 Asia Cup followed the T20 cricket format, which will also be followed in the 2022 Asia Cup. It would be enticing to watch if the seven times winner, India, would defend the Asia Cup 2022 title again or not. In the 2018 edition, India lifted the trophy against Bangladesh in the finals.

After a gap of 4 years, Asia Cup 2022 will set off in August 2022 in the United Arab Emirates (UAE). Initially, the cricket tournament had to be hosted in Sri Lanka, and later, it shifted to the UAE.

To know the schedule, squad, venue, and venue for the Asia Cup 2022, dive in.

After getting through the hindrances to hosting the Asia Cup, the final schedule for the upcoming Asia Cup hasn’t yet been officially released. Have a look at the schedule below:

For the Asia Cup 2022, no teams have announced their squads for the upcoming event, despite India and Pakistan. Let’s have a look at the Indian and Pakistan teams.

Recently KL Rahul was expected to draw out his name from the international event due to a hamstring injury. From the latest cricket news, it is confirmed that he is returning on the field with high energy and the

The participating players from the Indian squad are:

Qualifiers – The final team for Group A is yet to be unveiled.

Afghanistan, Bangladesh, and Sri Lanka squad is yet to be announced.

Host and Venue for the Upcoming Asia Cup Event

UAE is the hosting country for Asia Cup 2022, but the hosting rights are retained for Sri Lanka. The president of BCCI, Sourav Ganguly, has confirmed hosting the event in UAE. To welcome the champions of the cricket world for Asia Cup 2022, three grounds have been assigned to host the cricket tournament. These include Dubai International Stadium, Sharjah Cricket Stadium, and Abu Dhabi Cricket Stadium.

After the Board’s Apex Council meeting, Sourav Ganguly told the reporters, ‘ Asia Cup will be in UAE as it is the only place where there won’t be rain.’ The decision was finalized after the Sri Lanka Cricket Council pushed the third edition of the Lanka Premier League (LPL), impacted by the ongoing political and economic crisis.

Asia Cup 2022 is slated to be held from August 27 to September 11, being played in T20 format. The political turmoil in the island nation led it to draw out its name to host the much-awaited cricket tournament. Due to unrest inside the nation, the authorities decided to conduct the Asia Cup 2022 in UAE.