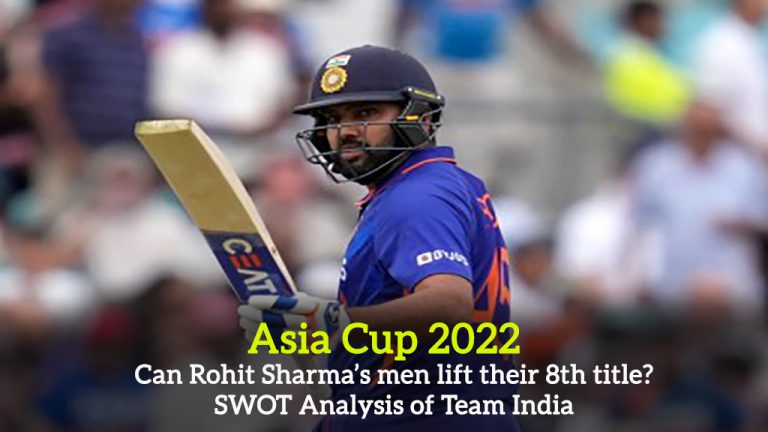 India has announced their 15 member squad for the upcoming Asia Cup 2022 which is to be held in Dubai from August 27th. Team India has high chances of winning the Asia Cup 2022 and are one of the top favorites as they have won the title seven times before. In 2018, India had won the cup under the captaincy of Rohit Sharma and had beaten Bangladesh in a thrilling final held at the Dubai International Stadium.

However, this time the Indian team cannot enjoy the services of Jasprit Bumrah as he has been rested due to back injuries, as per the latest cricket news today. This year, India will start the tournament by facing the arch rivals, that is, Pakistan under the leadership of Babar Azam, in their first match. BCCI has selected the squad for the tournament.

Rohit Sharma has done a brilliant job as a captain in the T20Is after taking over from the former skipper, Virat Kohli when the T20 World Cup ended last year in the UAE and Oman. The big question is: can India win for the eighth time and continue to be on top?

Bowling Attack of India – The bowling attack of India has been in great shape in recent times. In spite of the fact that Bumrah has been rested, a number of talents are in the bowling line-up to fill his place. Bhuvneshwar Kumar and Arshdeep Singh are perfect for bowling at death and in the powerplay.

It would be surprising if Arshdeep Singh does not make it to the playing 11, after the commendable performance he displayed in the T20I series against the West Indies. Ravi Bishnoi is another bowler who can be relied upon as he has bowled well in the opportunities he got. Moreover, Ravi Ashwin, Ravindra Jadeja and Yuzvendra Chahal are reputed for their accurate bowling and would give the competitors a tough time.

The versatile all-rounder was a key factor in Mumbai winning its fourth Indian T20 League championship in 2019 after displaying unstoppable form. Pandya had a respectable outing and solidified his spot in India’s 15-man World Cup squad with his consistent all-around performance. Follow us for the latest cricket news!

Hardik Pandya – Hardik Pandya has showcased his best form since he led the Gujarat Titans to glory in the IPL. He has notched his maiden T20I fifty against England and is indispensable. His bowling has caught more attention than his batting. He won the ‘Player of the Match’ award in the finals of IPL and thereafter picked up two four-wicket hauls against England according to cricket updates. Hardik also displayed an excellent form in the four T20Is he played against the West Indies.

Avesh Khan’s Lack of Consistency – Avesh Khan exhibited a great form for the Lucknow Super Giants and the Delhi Capitals. He has got a lot of opportunities in the Indian team but has failed to show consistency. Khan had not put up a great performance on the tour of England and he also failed to save 10 runs in the ultimate over during the 2nd T20I against West Indies. However, he has picked up some wickets in the fourth T20I against the Caribbean unit.

Deepak Hooda – Deepak Hooda is a great strength for the Indian team. He has proved his skills in both batting and bowling. Although he has not been able to pick any wicket in the T20Is but has an economy rate of 5.80 from the 5 overs he bowled. Even in the ODIs, he has an economy rate of 4.72. This shows that he can keep the scores low, if not contribute to picking up wickets.

Virat Kohli – According to cricket news, Virat Kohli has an average of over 60 in the history of Asia Cups which implies that he has been a great strength in the multi-format tournament. But his lack of shape in the recent days has been a concern for the Indian team. He has struggled to score runs against quality bowling but is expected to regain form because of his capability and the class he has.

KL Rahul – KL Rahul has been on a long break from international cricket. He had been recovering from a surgery and from Covid 19 and had last played in IPL 2022. He has been added to the Indian squad for the tour of Zimbabwe. His shape is not known presently and India has been depending on Rishabh Pant and Suryakumar Yadav for opening the matches.