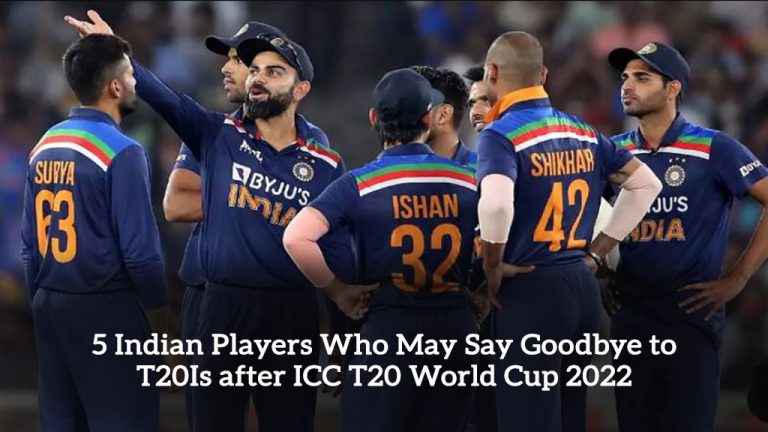 India will approach the T20 World Cup 2022, to win the best-loved title. Among many senior players of the current Indian squad, the Indian team gets revamped after ICC T20I World Cup.

However, the Indian team gets brimmed with new crickets every year, thanks to the Indian Premier League (IPL). It has been predicted that there will be a transition cycle going to happen in the Indian team in near future.

After this ICC event, the Indian men’s T20I team would kickstart an entirely new era. So, let’s check those who might say goodbye after the ICC T20I world cup with this cricket news for India.

1. Ravichandran Ashwin – Even though Ravi Ashwin’s unexpected return to the Indian team for the T20I format at the World Cup 2021 made headlines, he has since been sidelined and may not be selected for this year’s World Cup if none of the bowlers who are already on the roster are injured.

The 35-year-old may abandon the T20I format and focus his remaining cricket team on the game’s longest format, Test cricket.

2. Virat Kohli – The run machine Virat Kohli, whose last century was in 2019, has undoubtedly struggled to find ways to score runs. Both as captain and batter, he didn’t have a memorable 2021 T20I World Cup, which has prompted many inquiries regarding his position on the team.

After this World Cup, he might give up on the T20I format to focus on the other two formats and maintain his fitness. But every Indian fan secretly hopes that this isn’t the case.

Who Can Replace Virat in the T20I World Cup?

Proving the worth of his consistent performance, Shreyas Iyer is a 27-year-old batter who is likely to be the first player in replacement of Kohli in the upcoming World Cup.

Considering the cricket update India, Deepak Hooda is another name on the list who can be a replacement for Kohli. The right-handed batter was part of 5 T20I matches against South Africa. With a strike rate of 136.66 this season in IPL matches, he is a good fit in T20I matches.

3. Dinesh Karthik – If you are making a comeback to the Indian cricket squad at the age of 37, you have undoubtedly performed some sort of miracle or created nerve-wracking performances. Yes, Dinesh Karthik is the one garnering the most attention for his comeback, which is thought to be connected to his selection for this year’s T20I World Cup.

However, we think he might hang up his boots for a grand goodbye after this World Cup, and if not, the selectors might drop him to make room for younger players with a similar skill set.

Given that India will host the ODI World Cup in 2019, Bhuvi might consider continuing his ODI career. He might therefore decide to play the game in its shortest configuration.

5. Rohit Sharma – Rohit Sharma, 35, isn’t getting any younger and his health problems have been a big worry for him. The Indian captain has missed 24 games over the past two years owing to injury, and it’s possible that he won’t be ready to play in the next World Cup.

Given that he has played T20 international cricket since his debut, there is a chance he could decide to stop playing any one version of the game. Additionally, his most recent test cricket performances have been above average.

Due to Rohit Sharma’s Injury on the third IND VS WI T20 international at Warner Park in St. Kitts & Nevis, the 35-year-old appeared to be in discomfort and pulled a muscle near the waist or lower back.

However, the BCCI also provided a recent update on team India skipper Rohit Sharma’s and said that the batter has a back spasm. Also, the medical team is monitoring the situation.

Even though according to the latest Indian cricket team news, Rohit Sharma would most likely be seen as captain for the 1st T20I World Cup this year to be played against England.