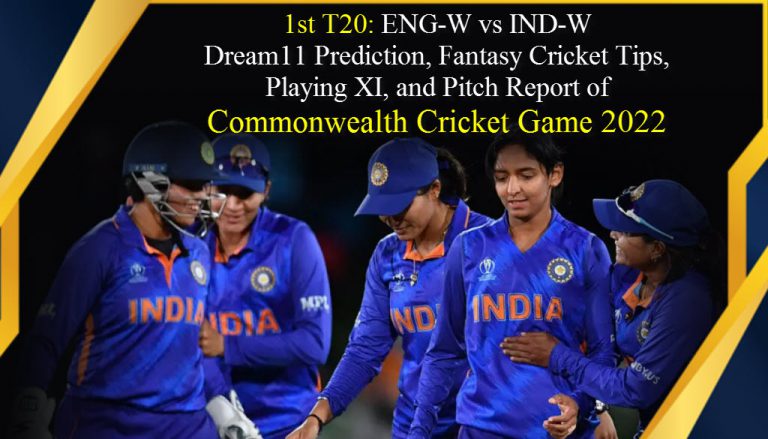 Dream 11 Prediction of England Vs India Women Match in Durham

The Indian women’s team, under the captaincy of Harmanpreet Kaur, is all ready to play against England in white-ball tour beginning with three-match T20I series. The first game, IND-W Vs ENG-W T20 1, is scheduled to be played on Saturday, September 10 in Durham. The Indian Captain Harmanpreet thinks that it is better to take a break from the game instead of pushing themselves too hard whenever they are feeling low because of a mental breakdown. This comment from the Indian captain came just as the England stand-in captain and all-rounder Nat Sciver stepped out of the white-ball series against India toconcentrate on her mental well-being.

The Current Form of the Indian Team
The Indian Women’s Cricket Team would be looking forward to continuing their good form as they displayed in the Commonwealth Games 2022 campaign that ended with a podium finish. England is hoping to avenge their loss in the semi-finals of Commonwealth Games 2022 against India. The Indian team has made a strong comeback after their brooding loss in the Women’s World Cup 2022. They defeated the Sri Lankan side in the T20Is and ODIs and have made it to the final of the inaugural women’s T20 cricket competition at the CWG 2022. Winning silver against the host country boosted the confidence of the Indian team prior to the series. However, Jemimah Rodrigues would be missed by the Indian team as the captain, on the eve of the game, has stated that she is still in recovery at the NCA. Due to an injury, she had to leave the Hundred in the middle.

The Present Form of England’s Team
Well, England too has quite a few problems. Heather Knight, the regular captain has been out of action for quite sometime and has undergone a successful hip surgery and is in rehabilitation. The stand-in captain, Nat Sciver, has also taken an indefinite break from cricket. Amy Jones, wicket-keeper batter, has been chosen as the captain for six matches against India.England is playing the game after two defeats consecutively, one against team India in semi-finals and the other against New Zealand in the 3rd place play-off in CWG 2022. Audience are awaiting an entertaining game as both teams are looking forward to start the game successfully.

Weather Report
Light rain has been forecasted in the weather report.

Player Picks
Knowing the current form of players and their past record is an essential part of cricket betting tips.

Captains
Danielle Wyatt – The captain of England has been in good shape in the recent matches and has scored runs in the top order. She has scored 2107 runs with an average strike rate of 21.07 in 132 T20I games.
Harmanpreet Kaur – She has displayed a good form in both batting and bowling in the T20I format. She has scored 2548 runs at an average 27.39 in 129 games.

Top Players
Alice Capsey – She has been in good shape recently and can be a good choice for your fantasy team. She has scored 160 runs at an average of 26.66 and has taken one wicket in 7 games.
Smriti Mandhana – She has been one of the best batters in the cricket world and has a smashing 2195 runs with an average of 26.40 in 92 matches. According to the India vs England dream 11 prediction, she can be a big asset for India.

Pitch Report
The Riverside Ground pitch is likely slower but would most likely be a good one for batting. With the new ball, some movement is expected. A good competition between the pacers and batters is expected and with the progress in game, the pitch is likely to slow down enabling spinners to come into play as per the India Vs England Women’s T20 dream 11 prediction.
Wrapping Up:
According to today dream 11 match prediction the Indian women’s cricket team is likely to win against England. After analysing the playing XI, the current performance of both the teams in the recent past and the pitch report, team India appears to be in abetter position compared to England. For more cricket betting predictions, follow CBTF Speed News.