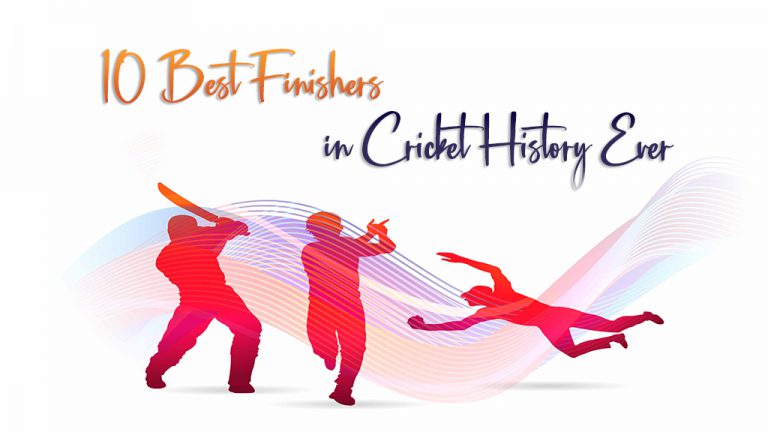 Cricket is not just a game but is an art itself. If you ask any cricket die-heart fan then you would get mountains of reasons to love and enjoy the game. Every cricket enthusiast loves to enjoy close finishes, and the excitement is at the top during the last over or the last ball that certainly makes long-lasting memory.

Soaking up the mental pressure is not for every batsman, and not everyone can hit 12-20 runs in the final over and win the game for their team.

We have got a list of those batsmen who became the world’s best finishers in cricket buzz and mentioned their names in history.

MS Dhoni, 41 years old, is still giving his best for the Chennai Super Kings after having retired from international cricket. Even though he batted lower in the order, he still has 10,000+ ODI runs, which is one of his many batting achievements. The chase in the 2011 ICC Cricket World Cup final is sufficient justification for the Indian legend’s rightful position at the top of our list.

Another outstanding professional who was calm as ice when it came to batting was AB De Villiers. The South African batter is unquestionably among the top finishers in the world known by the nickname “Mr. 360” for his batting prowess.

AB De Villiers played for South Africa between 2004 and 2018, scoring 19,000+ runs across all formats for his country. The batsman has taken many shots at targets, but one of his greatest accomplishments was being the only batsman at his time to average over 50 and have a strike rate of 100 or above. The batter established himself with the Royal Challengers Bangalore in the IPL as well, but he has since given up playing.

Michael Bevan, who was perhaps the best finisher in cricket at the time, was a member of Australia’s team in the late 1990s. The international Australian player chased totals like it was nothing at all.

Many believe that Michael Bevan was “The Finisher” who first used the nickname in cricket. He used to improve under pressure, and on top of that, he was a significant contributor to his country’s victories in the World Cup in 1999 and 2003.

Excelled in ODIs, Shahid Afridi has amassed 10,000+ runs across all formats.

Nearly every competition you can think of has had a game that the Pakistani all-rounder has won pursuing. However, Shahid Afridi’s consistency was his main issue. If the batsman had been a little bit more consistent in his game, he probably would have been ranked first.

Michael Hussey was regarded as “Mr. Cricket” because of his composed demeanour and in-depth understanding of the game.

According to the latest cricket news, the middle-order batsman for Australia performed superbly under duress. Hussey’s franchise side, the Chennai Super Kings, even gave him the opening spot because of his outstanding batting abilities. He has scored 12000+ international runs, and his retirement was missed by the Australian team.

Due to his ability to pinch hit, the Pakistani international has assisted his team in scoring several times.

The pinnacle of his batting career would undoubtedly be his 2010 knock against South Africa, which contained 10 sixes and a score of 109* from 72 balls. Abdul Razzaq has undoubtedly been one of the best finishers for his nation and the game of cricket, despite his unexpected and inconsistent batting.

Due to his ability to pinch hit, the Pakistani international has assisted his team in scoring several times.

The pinnacle of his batting career would undoubtedly be his 2010 knock against South Africa, which contained 10 sixes and a score of 109* from 72 balls. Abdul Razzaq has undoubtedly been one of the best finishers for his nation and the game of cricket, despite his unexpected and inconsistent batting.

In terms of winning games, Vivian Richards was perhaps the original Gangster. This is demonstrated by the fact that he amassed more than 15,000 runs during his 18-year career, which spanned from 1974 to 1991.

Due to his batting prowess, the West Indian was hailed as a “superstar” everywhere he went. Vivian Richards had a strike rate of 90 in ODI cricket despite being from a bygone era. This justifies his inclusion on our list of the greatest finishers in history.

Jos Buttler has genuinely mastered the art of winning games, and as a result, the batsman has made a name for himself in all game formats.

The strike rates of Buttler (118 in ODIs and 141 in Test Cricket) speak for themselves. The batsman is unquestionably one of the best in contemporary cricket, as evidenced by England’s victory in the 2019 ICC Cricket World Cup.

Beginning in 1975, Javed Miandad had a significant role in the team up until his retirement in 1996.

The fact by cricket updates that Miandad has amassed well over 16,000 international runs speaks to his batsmanship. He batted in the middle order and was renowned for playing tough innings and frustrating bowlers as he led his team to victory.

The former West Indies skipper, Kiron Pollard is an expert in limited overs cricket, as evidenced by his strike rates of 94 in ODIs and 134 in T20Is.

The fact that he represents numerous teams globally and performs the same, wherever he goes is one of the main reasons he made our list. With the Mumbai Indians, Kieron Pollard has a strike rate of 148.9 in the IPL, which only serves to highlight the batsman’s potential.

Cricket players spend a lot of time improving their batting skills and increase power to hit the ball out of the boundary. However, there are some from hundreds that are good enough to get their names in history as a finisher.

According to the cricket updates, MS Dhoni is all time best finisher in the world of cricket.