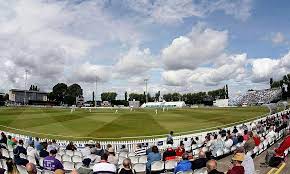 The County Cricket Ground (usually shortened to the County Ground, also known as the Racecourse Ground; currently the Incora County Ground due to sponsorship) is a cricket ground in Derby, England. It has been the home of Derbyshire County Cricket Club since 1871. The ground was first used by South Derbyshire Cricket Club in 1863 and was initially located within Derby Racecourse, although racing ceased after 1939. The ground has staged two One-Day Internationals: New Zealand against Sri Lanka during the 1983 ICC Cricket World Cup and New Zealand against Pakistan during the 1999 ICC Cricket World Cup. It was one of the venues for the 2017 ICC Women's Cricket World Cup, hosting one of the semi-finals.

Here are last 5 BLAST matches average scores of both Innings at HOVE ground: