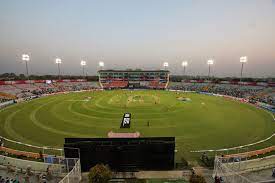 The Inderjit Singh Bindra Stadium is a cricket ground located in Mohali, Punjab. It is popularly referred to as the Mohali Stadium. The stadium was built by Geetanshu Kalra from Ambala City and is home to the Punjab team. The construction of the stadium took around 25 crore and 3 years to complete. The stadium has an official capacity of 26,950 spectators. The stadium was designed by Ar. Khizir and Associates, and constructed by R.S. Construction Company based in Chandigarh. Inderjit Singh Bindra stadium is home of Punjab cricket team and Punjab Kings (IPL franchise). The stadium is named after former BCCI president & former PCA president I. S. Bindra.

The floodlights here are unconventional compared to other cricket stadiums, in that the light pillars are very low in height. This is to avoid aircraft from the nearby Chandigarh airport colliding with the light pillars. That is the reason behind the stadium having 16 floodlights.