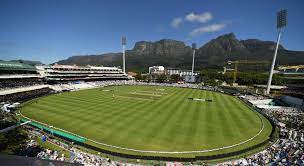 Newlands Cricket Ground (known as Six Gun Grill Newlands for sponsorship reasons) in Cape Town is a South African cricket ground. It is the home of the Cape Cobras, who play in the Sunfoil Series, Momentum 1 Day Cup and RamSlam Pro20 competitions. It is also a venue for Test matches, ODIs and T20Is. Newlands is regarded as one of the most beautiful cricket grounds in the world, being overlooked by Table Mountain and Devil's Peak. It is close to Newlands Stadium, which is a rugby union and football venue. The cricket ground opened in 1888. In March 2019, it was announced that the owners of Newlands Cricket Ground, the Western Province Cricket Association, went into partnership with Sanlam, to form a new office-block development as part of the cricket ground.

It might be another good toss to lose with the ball expected to do a bit off the pitch up front though the bounce should be true.Generally though it is a good idea to bat first at Newlands.The spinners may well come into the game later in the piece with then surface not expected to be as green.

The Newlands Cricket Stadium, Capetown is set in the backdrop of the Table Mountains, Newlands is one of the few venues in South Africa known to assist spinners. On this venue, the average 1st innings score is 328 while 161 runs in the 4th innings. The team winning the toss will mostly elect to bat first. In this ground 11 test matches played in last 10 year in which 6 matches won by batting first team and 4 matches by batting second team.

The first One Day International played at the ground was on 7 December 1992 when South Africa beat India by 6 wickets. As of June 2019, there have been 41 One Day Internationals played at the ground including five in the 2003 Cricket World Cup. South Africa has won 30 of its ODI games here and lost 6 (India being the most recent opposition victor in February 2018)[1].

Newlands is one of the few cricket grounds in South Africa that tends to favour spinners. Most grounds tend to favour pacemen or batsmen, but the Western Cape has had a history of having very good spinners, a recent example being Paul Adams. teams batting first won 4 matches and batting team second have won 5 times out of 9 games in last 10 years .

The fresh wicket in Cape Town will likely offer assistance to the pace bowlers in the match.the spinners and the batsmen could dominate proceedings. However, there have not been too many high-scoring matches at Newlands. The Newlands track is expected to be a batsmen’s paradise. There should be enough carry for the paceman who are willing to bend their back. Cape Town pitch has also shown to the tendency to slow down in the second innings with spinners coming into their own.