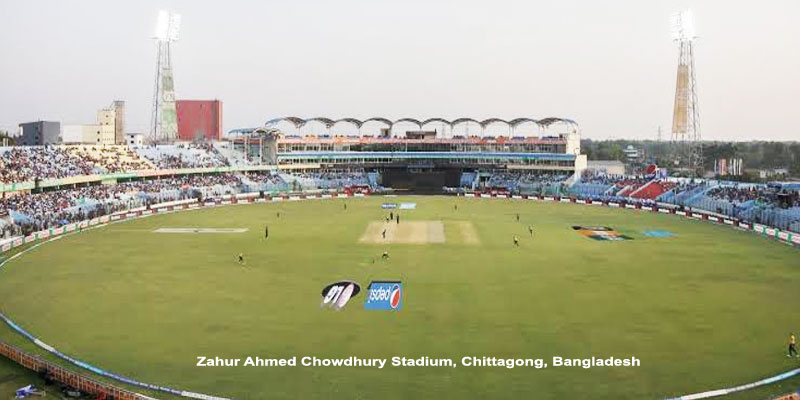 Situated about half-an-hour outside the city centre, the Chittagong Divisional Stadium was one of the five purpose-built cricket grounds established in the run-up to the 2004 Under-19 World Cup. It was finally granted full international status in January 2006, ahead of Sri Lanka's visit to the country. The stadium itself is an unremarkable concrete bowl set in acres of prime agricultural land, with a three-tier pavilion providing the focal point.

As the pitch is devoid of grass, the fast bowlers struggle a lot in the early days and hence the team that wins the toss at Zahur Ahmed Cricket ground usually decides to bat first to put up a winning score in the scorecard. The average 1st innings score is 350+ in Test matches. The bowlers have to be patient and consistent and by the 3rd and 4th innings, the footmarks of the previous day bowlers make the situation better, and the batsmen start struggling to spin bowlers which is the reason for the steep fall in the average scores. From the average scores in the all 4 innings of the last 5 Test matches at Sheikh Zayed Cricket ground, we can conclude that the first innings have a higher average comparatively and with each subsequent innings, the average score deteriorates.

It is evident that it is easy for batsmen to score runs on the first two days as there is lesser swing. The bowlers have to bowl a lot to get rewards but as the days pass, though the wicket gets flatter, the spin bowlers can help decrease the run rates.

Here are the test matches average scores of all 4 Innings at Zahur Ahmed Cricket ground:

As it is a batting pitch, the teams winning the toss in ODI at Zahur Ahmed grounds always prefer chasing. Of the 20 total matches played here, 7 teams have won batting first. Spinners can get help from the dry and rough pitch here on sunny hot days. Batsmen will enjoy batting here. In the case of One Day International matches, the pitch condition is similar to the scenario of Test matches. In the last five matches played here, the team batting first has managed to score more runs mostly.

Though the ground has a batting pitch that will help batsmen, unusual to the case of ODI and Test matches where teams prefer batting first, the teams that win the toss in T20 matches here prefer bowling first.