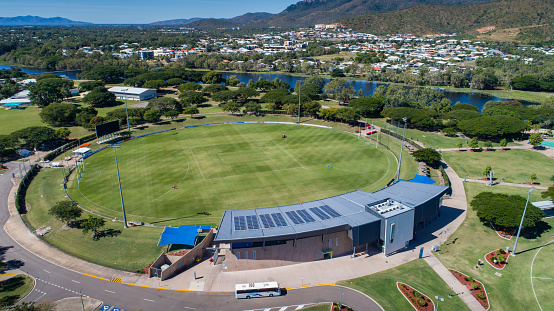 The Tony Island Stadium is an international standard cricket and AFL stadium in Thuringowa Central, Townsville, Queensland, Australia. The stadium is a part of the Riverway sporting and cultural complex.

The stadium includes the oval, a 1013-seat grandstand and supporting facilities, a practice oval and cricket practice nets. The design was modeled on Brisbane's Gabba cricket ground specifications and has a six turf wicket block. Riverway Stadium has a maximum capacity of 10,000+ This was achieved on New Year's Eve 2007 when 10,024 people attended a Twenty20 cricket match between Queensland and Victoria. The stadium is also home to the Thuringowa Bulldogs AFL club, and the AFL's local regional office. In June 2009, the stadium hosted a 4-day first class match between Pakistan A and the Australia A cricket team. The stadium also hosted some matches of the 2012 ICC Under-19 Cricket World Cup which was held in Australia from 11 August 2012. India emerged as the winner of Under-19 Cricket World Cup after beating Australia in the final at the Riverway Stadium.

In November 2014, the stadium hosted its first international match between debutants Papua New Guinea and Hong Kong. The Stadium became the 10th ODI venue in Australia.

The pitch at the Tony Ireland stadium favors the pacers initially and tends to get easier to bat on as the match progresses. The pacers can get benefit from the good bounce and movement that the surface provides and pick wickets upfront. The batters will have to be cautious at the start of the innings. The overs of spin will be crucial as the pitch offers a good turn.

As there are not many matches at the Tony Ireland stadium but the teams chasing a total have had more success as compared to the sides defending. Hence, it would be a better option to bowl first after winning the toss here.

Tony Island Stadium has hosted just 3 Matches as of now where the team batting second won. Without a doubt the pitch can be considered as a batting pitch as per the runs scored in the previous match and the team opts to bowl first if they win the toss. The pitch here is covered with grass which helps the fast bowlers to find there swing and enjoy the pace of the pitch.

Here are the last 3 matches average scores of both Innings at Tony Ireland Stadium ground: