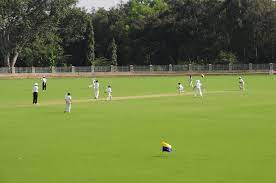 The Gangotri Glades Cricket Ground located in Mysuru, Karnataka, is a cricket stadium in India, located on the campus of the University of Mysore. It was renamed Srikantadatta Narasimha Raja Wadeyar Ground upon Prince of Mysuru Kingdom Prince Srikanta Wadiyar.

The Chamundi hills provide an idyllic backdrop, and the iconic Kukkarahalli lake is just a big-hit away. It has a seating capacity of about 15,000. It was constructed by the University of Mysore.In 1997, the Karnataka State Cricket Association entered into a 20-year agreement with the university to develop and maintain the ground as part of its efforts to promote the game in smaller centres. It was in 2007 that a new pavilion complex was constructed and the stadium got a facelift, making it fit to host Ranji Trophy matches.

This ground is the next home ground for the Karnataka Cricket Team after the M.Chinnaswamy Stadium . This ground is covered with Bermuda Grass

The pitch at Srikantadatta narsimha raja wadiyar ground is well balanced for both batters and bowlers in white-ball cricket. Pacers get little help with a new ball in the powerplay overs but batters are likely to dominate this match.

Here is the last 5 KPL Matches average scores of both Innings at Srikantadatta ground: